​My article ‘China’s socialist model outperforms capitalism’ established factually two key conclusions for global economic and social development. First, that the fastest growing economies since the putting forward in 1989 of the ‘Washington Consensus’ (excluding oil-production dominated economies or countries with populations  under 5 million) were not those following this model advocated by the IMF/World Bank but instead those following or deeply influenced by the entirely different China ‘socialist development strategy’ – China, Vietnam, Cambodia and Laos. Second, that 85% of the reduction of the number of those living in poverty in the world were in socialist countries and merely 15% in capitalist ones.
These facts have obvious key global implications. They establish that China’s socialist development strategy is the world’s most effective economic development ‘model’ – far more than any capitalist one. They clearly establish that the ‘China model’ is enormously more successful than capitalism in poverty reduction. The obvious conclusion is therefore that the central point of reference and study for global development strategy should be China and its socialist development strategy – not the Washington Consensus or any capitalist model.
Attempts by defenders of the Washington Consensus, who place themselves on the right of the political spectrum, to refute the facts demonstrated in ‘China’s socialist model outperforms capitalism’ are to be expected – even if unsuccessful. However Global Times carried an attempt to reply by someone declaring themselves opposed to the Washington Consensus – who may therefore be considered on the left of the political spectrum. This was Mike Cormack’s ‘Rational economic policies drive growth.’ Unfortunately, as will be seen this attempted response is vitiated by huge and simple factual errors. Nevertheless, as these factual errors are sometimes stated elsewhere, and repeat confusions of the Western left, it is worth outlining what these errors express – demonstrating why China’s economic thinking since Deng Xiaoping is so superior to that of the ‘Western left’.
Cormack’s attempted argument is that China, Vietnam. Laos and Cambodia did not succeed because of socialism but because of protectionism: ‘The development model practiced by these developing Asian nations is the protectionist model that most every developed nation has pursued… By protecting their economic development behind a wall of tariffs, quotas, subsidies and legal protections, countries have been able to build their productive capacity and to prevent unbalancing deficits. This was true of China’s astonishing growth in the reform and opening-up period after 1978.’
Not merely is this claim explicitly against China’s reform and ‘opening up’ strategy but it is simply entirely factually untrue – the reverse of the truth. A key feature of China is that far from being ‘protectionist’ it is the most open of the world’s largest economies. Figure 1 shows that China’s percentage of trade in GDP is 41% compared to 37% in Japan and 28% in the US.
Figure 1 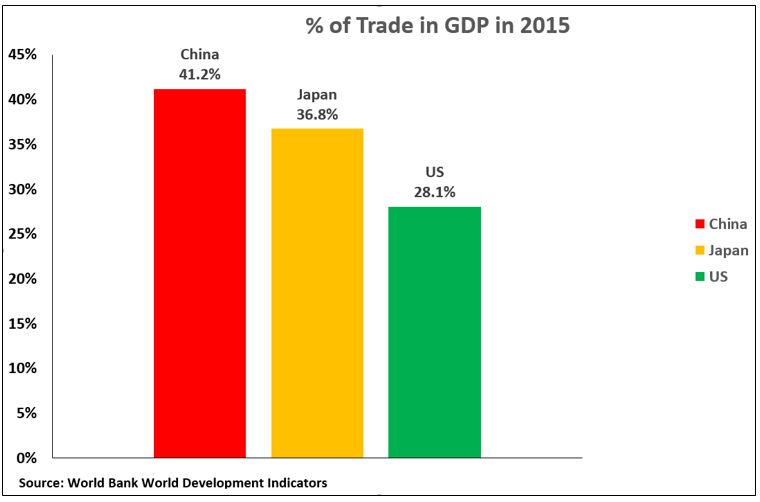 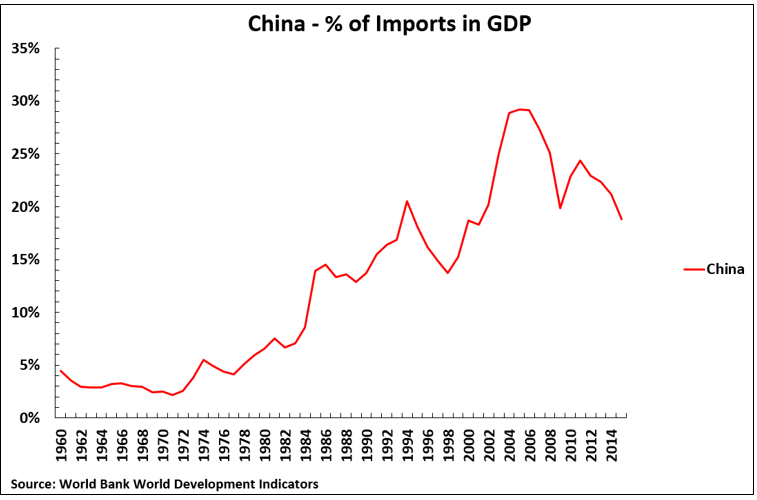 ​This ‘opening up’ also applies to the Indochinese countries heavily influenced by China’s economic model – Vietnam, Laos and Cambodia. Far from pursuing ‘protectionism’, starting with the earliest date for which data is available after 1978 up to 2015, the percentage of imports in Laos GDP rose from 6% to 44%, Cambodia’s rose from to 33% to 74% and Vietnam’s from 17% to 89%. This is shown in Figure 3. The Indochinese economies like China are extremely ‘open’.
Figure 3 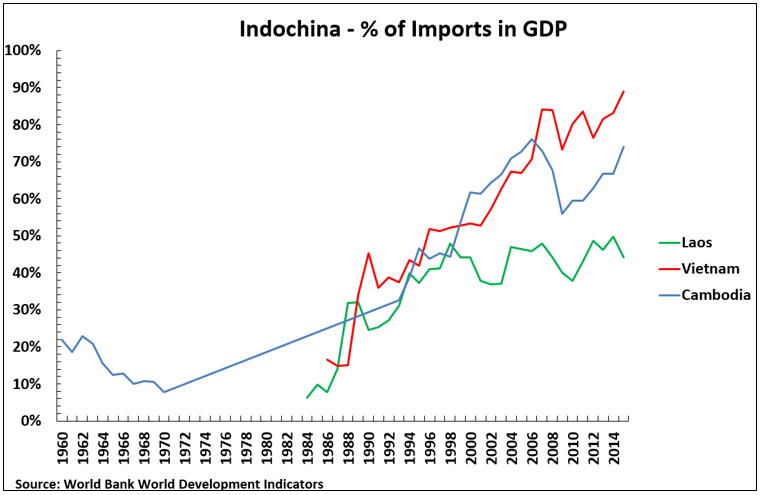 ​Capitalist protectionism, which Cormack advocates, has been a disastrous failure in every major modern economy in which it has been applied – even reducing what were once advanced economies, such as Argentina, to middle income status. This was inevitable because division of labour in Adam Smith’s terms, or socialisation of labour in Marx’s terms, is the most powerful force raising productivity – as modern econometrics confirms. In a modern economy such division/socialisation of labour is international in scale – therefore protectionism, by cutting an economy off from this, has negative effects.
China, Vietnam and Laos declare themselves socialist – Cambodia designates itself a monarchy but is decisively influenced by China. The practical meaning is China has state ownership of a large enough sector of the means of production to regulate its overall investment level. As the 3rd Plenum of the Central Committee of the 18th Congress of the CPC in 2013 reaffirmed: ‘We must unswervingly consolidate and develop the public economy, persist in the dominant position of public ownership, give full play to the leading role of the state-owned sector.’ No capitalist economy has this by definition – if private ownership of the means of production were not dominant it would not be capitalism.
Cormack’s article, regrettably, is therefore wrong on all relevant facts. The overwhelming success of China’s development strategy in global comparisons was because it was open and socialist ‘with Chinese characteristics’ not closed and capitalist.
*   *   *
A shortened and edited version of this article, without the charts, was published at Global Times.

Wrong analyses of China – listed by author and...