Linkedin
Facebook
Twitter
When on 3 September 2015 China staged its Victory Parade, commemorating the Chinese People’s War of Resistance Against Japanese Aggression and China’s contribution to the World War against fascism, this was a solemn day for China and an opportunity for the world to understand events which are not only historical but without which today’s world cannot be comprehended. Indeed because the outcome of these gigantic events powerfully shapes our present world they require precise assessment. 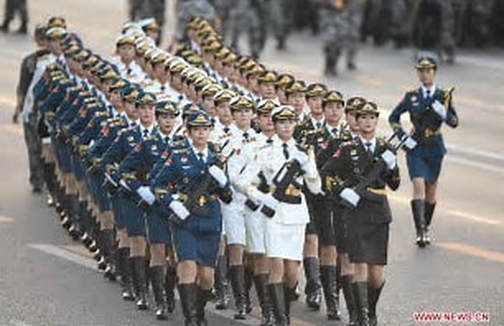 Equal Individual bravery
The men and women of every country who fought Japan and Nazi Germany from 1931-1945 showed the greatest and identical courage and self-sacrifice. I emphasise that from the degree of personal knowledge available to younger generations not only in China. My father-in-law was in the Allied armies which landed in France on D-Day June 1944. From many conversations with him I know that the extreme danger of that day, and the bravery and self-sacrifice seen, still indelibly marked all his views 70 years later.
When living in Russia from 1992-2000 the father of my assistant, a high-ranking military specialist, still went to his office aged more than 80 to contribute his knowledge to his country. Veterans of China’s resistance to Japanese aggression, and those who fought fascism and militarism in every country, immediately understand such people.

Western distortions of the history of World War II
I stress that the same degree of individual heroism was shown by those of every nationality fighting Nazism and Japan’s aggression because this must not disguise the fact that the distortion of the history of World War II in the West is something intellectually shameful and not merely an historical matter.
The view of World War II typically presented in the Western media, notably by Hollywood, is that the World War against fascism was won by American marines who advanced across Pacific Islands while the D-Day landing in France created victory in Europe. The facts and numbers tell a totally different story.
The US lost 420,000 military and civilian dead in World War II, the UK 450,000. China lost over 30 million, over 90% of the deaths in the Asian theatre of the war, while the USSR lost 27 million dead against Nazism. The overwhelming majority, almost three quarters, of Japan and Germany’s troops fought not the US or Britain but China and the USSR. In Europe it was the Soviet victories at Moscow in 1941, Stalingrad in 1942/43, and Kursk in 1943 that crushed Nazi Germany. By the time the allies landed in Normandy in June 1944 the decisive battles of the war had already been fought in the East and the defeat of Hitler was inevitable. In the Pacific it was China that tied down by far the greatest number of Japanese troops.

China and the European theatre of World War II
As China’s relation to the European war is least understood it will be analysed first. The core of Europe’s conflict was Germany’s attack on the USSR. Germany never committed less than two thirds, often three quarters, of its military forces to this. In three decisive battles – Moscow in 1941, Stalingrad in late 1942-early 1943, and Kursk in summer 1943 the Nazi army’s backbone was crushed. From summer 1943 the USSR launched a permanent offensive culminating in Berlin’s capture. Europe’s liberation was achieved by the sacrifice of 27 million Soviet dead. June 1944’s D-Day landing in France was not the war’s decisive event, as Hollywood pretends, but a late blow kicking down part of an already defeated Nazi structure. The heroism and sacrifice of the Soviet people in defeating Nazi Germany was one of the most glorious pages in human history
But a decisive strategic reason for this Soviet victory also lay in China. The key strategic question of Europe’s war was why Japan did not attack the USSR from the East simultaneously with Nazism from the West? If Japan had done so even the Soviet people’s extraordinary heroism might have been unable to achieve victory and at best would have required still greater sacrifices.
China determined this situation. In summer 1939 Soviet forces defeated an incursion by 80,000 Japanese troops at the battle of Khalkhin Gol. From then on Japan understood war could only be waged against the USSR with the full weight of its armed forces – hundreds of thousands or millions of troops. This was impossible as China’s ferocious resistance since Japan’s invasion in July 1937 tied down the overwhelming bulk of Japan’s army. Japan was forced to negotiate the Japanese–Soviet Non-aggression Pact. The scale of the Chinese people’s resistance to Japan had a crucial effect even on the European theatre of the war.

China in the Pacific War
Turning directly to the Pacific War, Japan’s strategy for fighting the Asian war was explicit – to damage the US fleet at Pearl Harbour and then form a hardened defensive Pacific perimeter which would grind down the inevitable US attacks until the US negotiated a settlement allowing Japan to retain part of its Asian gains.
The scale of China’s resistance entirely undermined Japan’s strategy. At the time of Pearl Harbour 80% of Japan’s troops were in China. They could never be released to form the Pacific perimeter against the US due to China’s resistance. Japan launched repeated attacks in China including in 1944 using 500,000 troops in the Ichi-Go offensive. This was almost twenty five times the 21,000 Japanese troops that fought the US at Iwo-Jima or more than six times the 76,000 regular Japanese troops that defended Okinawa. Given appalling US casualties in both battles if Japan had been able to release hundreds of thousands of troops from China to defend its Pacific perimeter the total Allied victory in Asia’s war at worst might not have been achieved, and at best would have involved far greater US causalities.
Japan totally underestimated China’s resistance. For four years before Pearl Harbor, China tied down the overwhelming bulk of Japan’s army. Japan defeated the Kuomintang (KMT) led forces in the conventional battles for Shanghai, Nanjing and other cities, but its control only extended to major towns and transport routes. Even when Japan’s forces advanced, they were isolated and tied down in the great expanse of China, its countryside. With far greater Japanese forces forced to fight in China than in the Pacific, Japan’s defensive perimeter against the U.S. was hugely weakened.

The birth of the People’s Republic of China
This resistance also determined events in China. Troops in the KMT led army showed equal heroism to Communist forces. But the quality of the leadership of the two resistance forces against Japan was decisively different. Chiang Kai-shek notoriously declared, “The Japanese are a disease of the skin, the Communists are a disease of the heart.” The KMT regime’s bankruptcy was dramatically highlighted by Chinese resistance. By June of 1944, U.S. Foreign Service reports concluded that “The Generalissimo is losing the support of a China which, by unity in the face of violent aggression, found a new and unexpected strength.” On August 23, 1945, eight days after Japan’s surrender, He Yingqin, the KMT army Commander, authorized military operations by Japan’s troops remaining in China against the Communists. It was precisely for such reasons of the rottenness of its regime that although in August 1945 the KMT occupied three quarters of China, with military forces six times larger than the Communists, it lost the ensuing Civil War and the People’s Republic of China was created in 1949.
This is the final link to the parade China held on September 3 2015. By 1945, China had suffered under continuous foreign aggression for over a century, the new China created by the Communist victory in 1949 ended this.
​
We stand on the shoulders of giants
In the War of Resistance Against Japanese Aggression, as the prolonged struggle of China against Japan from 1931-1945 is known, more than 30 million Chinese people died. This gigantic sacrifice was not in vain. It is solely due to their efforts that their children and grandchildren saw the rebirth of China symbolized in the Victory Parade of a country with the world’s most dynamic economy and military forces so strong no country dare attack it. The generation that fought the war against Japanese aggression above all sacrificed for their motherland, but they wrote an immortal page not only for China but for all humanity.
Unlike Holl
ywood China is not seeking any pre-eminent position. It states every country that participated in the greatest military conflict in human history, the World War to defeat Japanese aggression and Nazism, played a vital role. The sole reason the present generation enjoy relative peace and prosperity, and are not called upon to show the same courage as the generation of 1931-45, is because of that gigantic earlier sacrifice. But regarding such immense events there are two great truths. Individually the courage of combatants of every country participating in the great defeat of aggression and fascism was equal, and that in that struggle no country played a greater role than China.​

*    *    *
​This article condenses material that appeared in several publications on the 70th anniversary of the end of the Asian theatre of World War II.

One year on, impact of Xi’s agenda-setting Dav...

We have entered the “China period of the devel...

Why are China and India growing so fast?