Vu Minh Khuong’s The Dynamics of Economic Growth is the most important book on world economic growth to have appeared for many years. It is for that reason (full disclosure) that I did a small amount of work assisting on editing it.

The crucial importance of the book is rightly summed up by Professor Dale Jorgenson, of Harvard University, in his forward: “The emergence of Asia… is the great economic achievement of our time. This has created a new model for economic growth built on globalization and the patient accumulation of human and non-human capital.’ However the book’s economic importance goes far beyond Asia – although it is by far the most important comparative study published anywhere of how East Asian countries became prosperous. The aim of this review is therefore to explain why the book is so important from the point of view both of general economic theory and policy making. 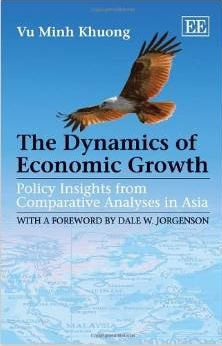 There are two different strategies for economic growth, related to two different theoretical analyses of its causes, which have been pursued in the world in the last six decades.

(i) The first analysis is that the primary force in economic growth is accumulation of capital and labour (factor accumulation) and that productivity (Total Factor Productivity – TFP), while significant is less quantitatively important than factor accumulation. This growth strategy was pursued in the developing Asian economies. It has been a spectacular success, creating the fastest increases in living standards ever seen in human history, lifting hundreds of millions out of poverty and now creating `first world’ living standards in a series of what were originally `third world’ countries (South Korea, Singapore etc.).

(ii) The alternative analysis says that factor accumulation, of capital and labor, is not nearly as important for growth as TFP. This is the policy that has been applied in the advanced economies, and has accompanied their economic slowdown. As Jorgenson notes in his forward: `The growth strategy of many advanced economies emphasizes innovation, which has been quite satisfactory for the past decade, but neglects investment in human and non-capital, which continues to fall.’

(i) if the most important driver of economic growth is factor accumulation, then the most important policies are those promoting high rates of factor growth. These include high savings rates (to finance capital investment), policies to widen participation in the labor forces (as this increases labor supply), promotion of education (as this increases labor inputs via increasing labor quality) etc. A reasonable rate of growth of TFP is important, but quantitatively not as important as policies which facilitate factor accumulation. As Vu summarizes the results: `the secret of the Asian growth model lies not in achieving high TFP growth but in sustaining reasonable TFP growth despite the intensive mobilization of factor inputs over extended periods.’
In particular, Vu notes: `The growth model of the successful Asian economies… is not outside the realm of development economics. Rather, this model is the outcome of a strategic policy framework that focuses on fostering and sustaining the high marginal product of capital. In other words, this policy framework pays strategic attention to enhancing the attractive rates of capital investment.’

(ii) Alternatively, if the main locomotive of growth is believed to be TFP growth, then policies promoting factor accumulation (high saving rates, widening participation of the population in the work force etc.) are not so important as factors assumed to increase productivity.

These two different practical growth strategies are directly related to statistical and theoretical analysis of economic growth. The formalisation of `growth accounting’ was carried out in the 1950s by Nobel Prize winning economist Robert Solow. There is an immense literature on the key issues in growth accounting – the best single historical survey of which is Jorgenson’s introduction to The Economics of Productivity.

But in his justly famous ground-breaking papers Solow’s calculations made the error of not taking into account improvements in the quality of investment and labour. This led to the erroneous conclusion that the majority of economic growth came from productivity increases. This latter mistake was subsequently corrected, and accurate methods of calculating growth were formally adopted by the US, UN and OECD.

The person who more than anyone else developed more accurate measuring tools for growth was Jorgenson. Jorgenson initially developed his analyses for the US economy and this was then extended to other advanced economies.

Vu’s enormous contribution is to show the same processes operated both in Asia and globally. By doing this Vu shows why earlier predictions that the Asian `economic miracle’ could not take its economies to `first world’ living standards were shown to be inaccurate by the actual continued development of these economies – Singapore now has a higher per capita GDP than the US.

But the data in the book also gives clear guidelines for the advanced economies. The overwhelming cause of the East Asian countries rise to prosperity was their huge accumulation of capital investment. As Vu notes: `Capital accumulation was… the primary driver of Developing Asia’s lead over other parts of the world in terms of economic growth.’ There were no exceptions in this pattern of successful Asian development: `The pattern of rapid growth driven by intensive capital investment… is consistent over time and robust to different types of economies in terms of size, location… and level of development.’

However, crucially for economic policy in all countries, Vu shows that this fact that investment was the driving force of Asia’s rise to prosperity was not unusual. Modern econometrics shows clearly that investment is the main factor in economic growth in all parts of the world economy: `the importance of capital accumulation as the driving force for economic growth is not unique to Asia but pervasive worldwide. For example, Jorgenson and Siroh…, Oliner and Sichel… found that capital input is the most important source of growth in most economies. This source of growth is important not only for the developing countries, in which the capital stock per capita is low, but also for developed nations, in which the capital stock per capita is relatively high… even for the G7 economies, investment in tangible assets was the most important source of economic growth and the contribution of capital input exceeded that of total factor productivity for all countries for all periods examined. This finding is supported by the results… that, on average, capital input accounted for approximately 57 per cent of GDP growth in the industrialized group.’

This explains why the downplaying of factor accumulation (capital investment and labor development) in the advanced economies has been unsuccessful as a growth strategy. TFP by itself is just too small a part of the economy to create rapid economic growth.

In short Vu’s book has decisive implications for economic policy in developing economies outside Asia, for the developing Asian economies, and for the advanced economies. Its demonstration that: `the secret of the Asian growth model not in achieving high TFP growth but in sustaining reasonable TFP growth despite the intensive mobilization of factor inputs over extended periods’ is applicable in every economy.

This also directly applies to developed economies, and, as Jorgenson notes, the successful growth strategy of Asia is counter posed, and has proved itself superior, to those strategies based on TFP growth (innovation, entrepreneurship) in Europe and the US. As Jorgenson notes: `Economic commentators, especially those outside Asia, have been reluctant to recognize the new paradigm for economic growth that originated in Asia, since this would acknowledg
e the failure of Western ideas that still greatly predominate in the literature on economic growth and development.’

It is not accidental that two of the most important writers on economic growth and policy today are Asian – Justin Yifu Lin from China, although for period Vice President of the World Bank, and Vu Minh Khuong from Vietnam, currently based in Singapore.

The most widely discussed book on economics at present is Piketty’s Capital in the 21st Century. This is justified. It is what economics should be about – a masterpiece of factual research from which its theoretical conclusions flow. Piketty’s subject is distribution of the results of growth.

If that sounds like the highest possible praise it is because it is intended as such. This book really is that important for economic policy in every country.

*   *   *
This review was published in 2014. Nothing has changed since then, Vu’s masterpiece remains indispensable reading for all those interested in or aiming to achieve economic growth.