Linkedin
Facebook
Twitter
The decisive global role being played by China in leading the way in the development of renewable energy is now being recognised in the Western media – see the Financial Times article ‘The East is turning green’ summarised on this site’s blog. The Financial Times rightly notes of China and India: ‘both countries are set to exceed the targets they set for themselves under the 2015 Paris agreement on climate change.’
​
But what is not yet sufficiently understood is that it is China’s manufacturing prowess, particularly in solar power, which is making renewable energy commercially viable. This article therefore analyses the literally world changing development of China’s renewable power technology and in particular the development of its solar power industry.
*   *   *
China’s achievements in economic development and poverty reduction are historically unprecedented. Nevertheless, it must not be forgotten from what an extremely low base China began its modern development in 1949, after a century of foreign invasions and wars.
​
In 1950, only 10 countries for which data are available had a lower per capita GDP than China. This underlines the country’s extraordinary progress in that, by 2015, it had already achieved an “upper middle income” status under World Bank standards, with higher per capita GDP than countries containing the majority of the world’s population. As Figure 1 shows, China has been steadily closing the gap with the world’s most advanced economy, the U.S.
Figure 1 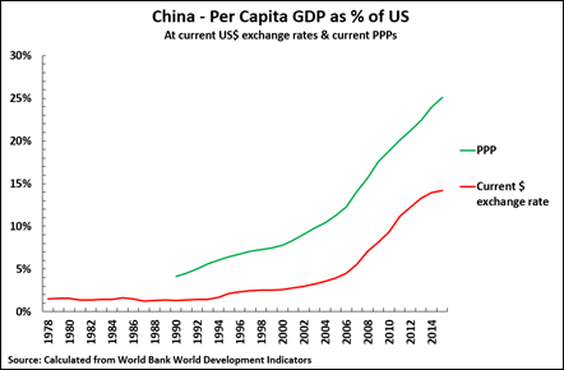 ​But despite this, by 2015 China’s per capita GDP was still only 14 percent of the U.S. figure at current exchange rates and, more significantly for long term development, only 25 percent of the U.S. when using the purchasing power parity (PPP) calculation. 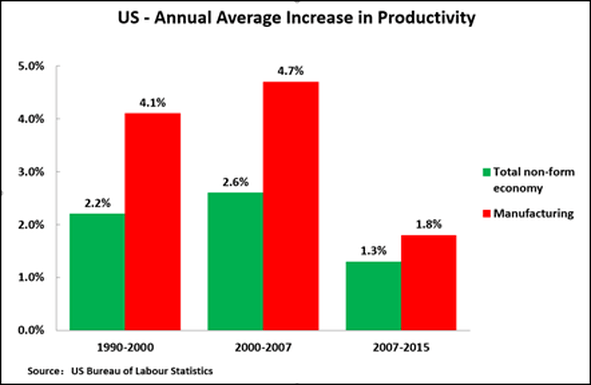 ​This fact that productivity increases in manufacturing are much higher than in non-manufacturing conditions China’s decisive economic objectives. The McKinsey Global Institute for example calculates the long term potential for China’s economic sectors as shown in Table 1. The highest potential for China’s annual productivity growth outside agriculture is 8 percent in R&D-driven manufactured goods, 6 percent in capital intensive commodities, and 5 percent in consumer goods. This compares to only 4 percent in non-financial services and 1 percent in financial services.
Table 1 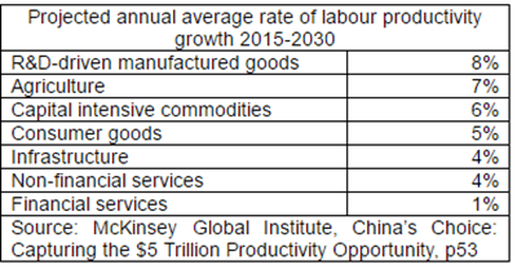 China already leads the world in total power supply – over 30 percent larger than the U.S., but needs to triple output to match the U.S. in per capita power supply.

Yet, the present structure of China’s power supply is highly undesirable from the environmental viewpoint. In 2013, the World Bank reported 75 percent of Chinese electrical power was coal generated compared to Germany’s 47 percent, America’s 40 percent and Japan’s 32 percent. Even with modern, and expensive, methods of treating coal burning, this is environmentally undesirable.

What are the alternative renewable energy sources? China has an advantage in hydroelectric power (17 percent compared to Germany’s 4 percent, America’s 6 percent and Japan’s 8 percent). But the proportion of China’s electricity supply generated by other renewable sources lags other major economies.

In 2012, World Bank data showed China produced only 2.7 percent of its electricity supply from non-hydroelectric renewable sources compared to Japan’s 4.6 percent, America’s 5.5 percent, and Germany’s 19.5 percent. This is despite China being by far the world’s largest solar panel manufacturer.
​
Solar panels
In June 2016, Bloomberg Technology noted estimates of the International Renewable Energy Agency that: “The average cost of electricity from a photovoltaic system is forecast to plunge as much as 59 percent by 2025.” Therefore: “The amount of electricity generated using solar panels stands to expand as much as six-fold by 2030 as the cost of production falls below competing natural gas and coal-fired plants.”

As solar power is undergoing rapid technological innovation, with major improvements in power to price ratio, R&D capacity is decisive. Alongside China’s scale of production, its academic-based R&D in the renewable energy field already leads the world.

KIC InnoEnergy, established by the European Institute of Innovation and Technology to initiate new ways to achieve European innovation, concluded that the Chinese Academy of Sciences was the world’s number one academic research center in sustainable energy:

“Chinese research institutions are considerably ahead of their European and U.S. peers in sustainable energy innovation, including wind, ocean and solar power as well as smart grids and intelligent buildings.” It found nine of the world’s top 15 academic research institutions in the field were in China.

There was still weakness in transferring academic research into companies but Diego Pavia, head of KIC InnoEnergy, noted: “Chinese researchers have told us: ‘we have learned as much as we can from Europe, now we have to lead and create innovation’… But they have decided to do it, so I have no doubt they will.”
In 2015 China accounted for more than a quarter of global solar installations, and it plans to more than triple its solar power capacity by 2020, adding 15 to 20 gigawatts of photovoltaic power annually in the next five years.
​
Development of renewable energy, is decisive for the fight against climate change. Economically, with a rapidly expanding global market, the world’s largest home market, unequalled scale of production, and already established research capacity, solar power is crucial to China’s future.

US is losing the battle for world public opinion to China

Gallup carries out an annual international poll on approval of the leadership of major countries. This year’s poll, covering ...
Read More →

The 100th anniversary of the founding of the Communist Party of China (CPC) comes as not only China ...
Read More →

Here’s why China and BRICS will drive global economic growth

It is frequently underestimated just how dependent world economic growth is on only a few countries. Strikingly, on ...
Read More →

​Unfortunately some discussion in the media of how China can become a 'high income' economy fails to follow ...
Read More →