How Singapore achieved a higher per capita GDP than the US

Linkedin
Facebook
Twitter
​The economic development of Singapore under is famous as one of the greatest success stories in history. Singapore has become the only Asian country to achieve a higher per capita gross domestic product than the United States by every measure. To have achieved this from the starting point of a third world country, and during a single lifetime, is a true Asian “economic miracle” meriting close study by every country, and above all by every developing country. This naturally includes China. What, therefore, were the fundamental mechanisms explaining Singapore’s stunning economic success? 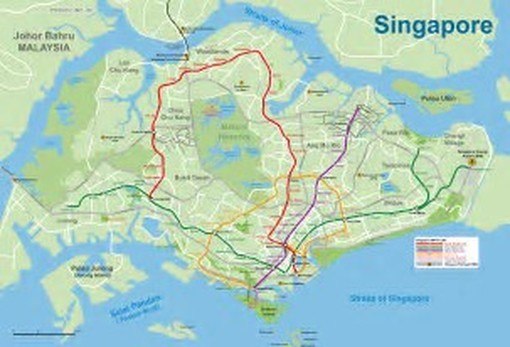 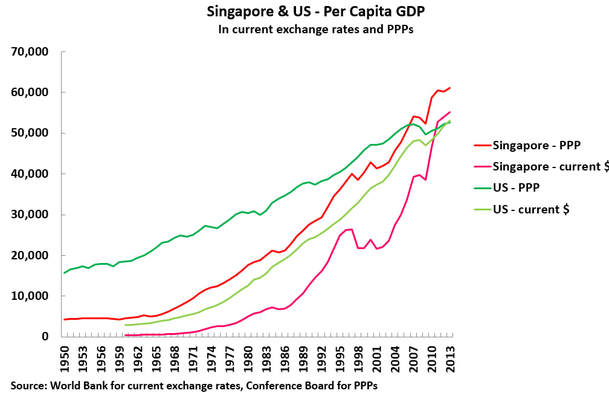 ​In obituaries of Lee Kuan Yew and during his lifetime, emphasis was placed on his “authoritarian” politics or his espousal of “Confucian values,” but what in strictly economic terms was the basis of Singapore’s sensational success? Obviously, this is the topic of greatest interest to every developing country. If China could achieve Singapore’s level of per capita GDP, higher even than that of the U.S., the “Chinese Dream” of economic development would be more than achieved. What lesson, therefore, can China and every country draw from Singapore’s “economic miracle?”
Singapore was a classic example of the success of an “open economy:” Singapore’s total trade is indeed considerably higher than its GDP. This is, of course, in line with the ideas behind China’s “opening up” policy. But every study shows that Singapore’s domestic development was based overwhelmingly on the huge accumulation of capital and labor, with only a tiny contribution coming from productivity growth (technically known as Total Factor Productivity, or TFP).
This reality was first noted in the 1990s by the United Kingdom-based economist Alwyn Young. His finding was used by U.S. economist Paul Krugman in a famous 1994 paper entitled “The Myth of Asia’s Miracle” to predict Asia’s coming economic failure. Krugman argued that successful economic growth should be based on productivity development, not on accumulation of capital and labor. But, of course, it was Krugman who was proved wrong as Singapore’s per capita GDP overtook even that of the U.S.
Young’s finding has since been replicated by every major study of Singapore since. The latest, by Vu Minh Khuong of the Lee Kuan Yew School of Public Policy at the National University of Singapore, is summarized in Figure 2 below. This study found that 59 percent of Singapore’s economic growth came from capital investment, 34 percent from growth of labor inputs, and only 8 percent from productivity (TFP) increases. 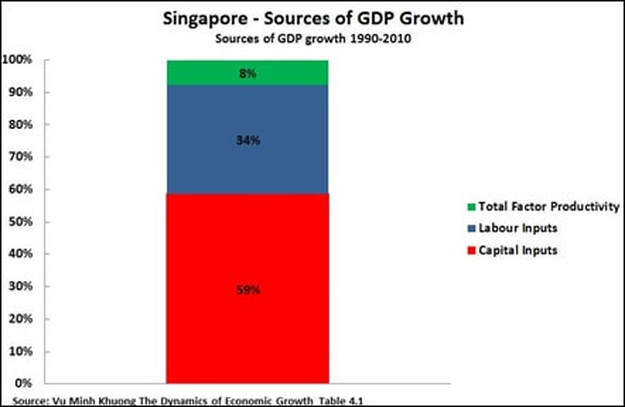 ​In short, every study has found that Singapore’s achievement of the highest level of economic development in Asia – a higher level of per capita GDP than the U.S. – was based on massive accumulation first of capital and then of labor, with productivity growth playing a tiny, almost non-existent, role.
Vu, in the most exhaustive study of the subject so far, also found that Singapore’s model corresponded to successful economic development in Asia in general. Successful Asian developing countries showed a pattern of economic growth fundamentally driven by capital accumulation. As Vu summarized, “The secret of the Asian growth model lies not in achieving high TFP growth but in sustaining reasonable TFP growth despite the intensive mobilization of factor inputs over extended periods.”
As Dale Jorgenson of Harvard University, whose work has led to the most modern official methods of calculating the sources of economic growth by the OECD and other international agencies, put it, “The emergence of Asia from the underdevelopment that persisted until the middle of the last century is the great economic achievement of our time. This has created a new model for economic growth built on globalization and the patient accumulation of human and non-human capital. Economic commentators, especially those outside Asia, have been reluctant to recognize the new paradigm for economic growth that originated in Asia, since this would acknowledge the failure of Western ideas that still greatly predominate in the literature on economic growth and development.”
Indeed, a key reason for Singapore’s economic success was that its pattern of economic development corresponded – even more than most Asian economies – to that of a developed economy, with its overwhelming dominance by capital accumulation and labor inputs and the small role played by TFP growth. This can be seen clearly from comparing the data for Singapore with that for advanced economies shown in Figure 3.
In advanced economies as a whole, 57 percent of growth is due to capital investment, while in Singapore that figure is 59 percent. In advanced economies, 32 percent of growth was due to labor inputs, whereas 34 percent of growth in Singapore was due to labor inputs. Furthermore, 11 percent of growth in advanced economies was due to TFP increases, and in Singapore it was only 8 percent.
In short, Singapore’s pattern of growth was essentially the same as that of an advanced economy, which is largely the reason why Singapore has achieved the per capita GDP of an extremely advanced developed economy. 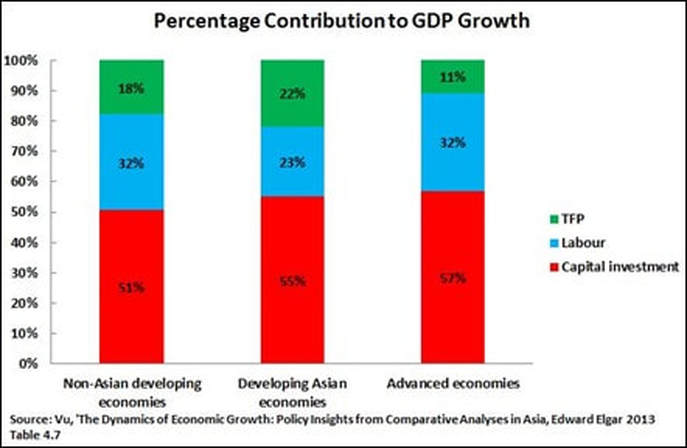 ​To put it in blunt but accurate terms, Singapore’s economic development showed that quantity was far more important than quality in achieving a higher level of per capita GDP than the U.S.
This is indeed a lesson for China and for every developing country to study as they seek to replicate Singapore’s success and approach the level of advanced economies.

Wrong analyses of China – listed by author and...

The US presidential election and its effect on US re...