Growth in the G7 ‘Great Stagnation’ will be slower than in the Great Depression!

The Western G7 economies are in, and will remain locked in, very slow growth. How slow this growth is can be seen starkly by taking an historical comparison: the average growth in the Western economies in the entire period since the international financial crisis in 2008 will actually be slower than in the Great Depression after 1929!
The reality of a ‘Great Stagnation’ in the West has not merely major economic consequences but also major geopolitical effects which are summarised in this introduction and then will be analysed in greater detail in the conclusion of this article. This ‘Great Stagnation’ explains, for example, the political instability in the US around the Trump administration, in the UK around the vote for Brexit, and in France Macron’s recent crushing defeat of the traditional political parties.
This overall reality is crucial to bear in mind because in 2016 economic growth in the G7 economies was so slow, per capita GDP growth of only 0.9%, that for purely statistical reasons a partial recovery is likely in 2017. But, as will be analysed below, this upturn will be weak and will not restore the Western economies to relatively rapid growth. In terms of its perspectives for the international economy China must therefore be prepared for:

A detailed analysis of the causal reasons for this very slow Western economic growth was given, focusing on the US, in ‘Why the US Remains Locked in Slow Growth’. A theoretical analysis is given in my book The Great Chess Game (一盘大棋? ——中国新命运解析). These analyses are therefore not repeated here. This article analyses the factual trends in the G7. It uses a source which cannot be accused of being biased against the West – the IMF. Indeed, analysis of the twice-yearly IMF predictions for the advanced economies shows that it has consistently overestimated the growth that will occur in the Western economies. All contemporary data in this article is from the latest IMF World Economic Outlook.
The rest of this article will analyse in detail the points made in this introductory summary.

Long term trends
Starting with the most fundamental long-term trends, Figure 1 shows annual average GDP growth in the G7 economies up to the 1st quarter of 2017, while Figure 2 shows per capita GDP growth – both calculated using a 20-year moving average. The reason for analysing such a long fundamental trend is that market economies inherently show business cycles, therefore short-term trends are distorted by periods of economic expansion (which exaggerates average growth) or economic recession (which underestimates average growth). Using a long term moving average removes these cyclical shifts and allows the fundamental trend to be seen. Shorter term periods will be analysed towards the conclusion of this article.
The fundamental feature of G7 growth is clearly its profound slowdown. Annual average GDP growth has fallen from 4.1% in 1981 to 2.1% in the 1st quarter of 2017. Per capita GDP growth fell from 3.3% to 1.2% in the same period. Per capita GDP growth in the G7 in the last 20 years is therefore only slightly over 1%. The cumulative social and economic effects of such a prolonged period of very slow growth, of course, underlies the growing political instability and political fluctuations in the advanced economies mentioned at the beginning of this article and analysed in greater detail in the conclusion. 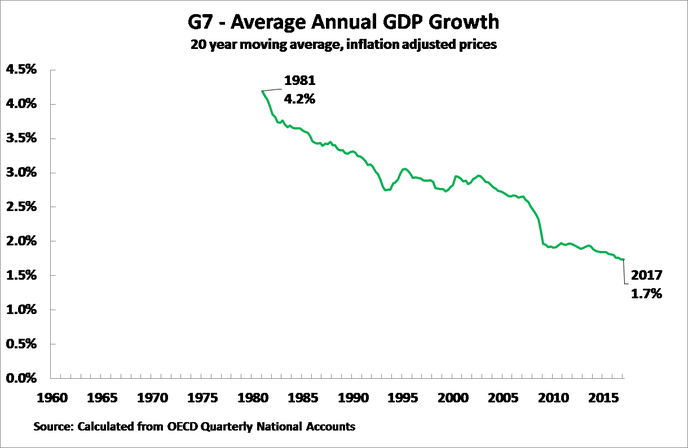 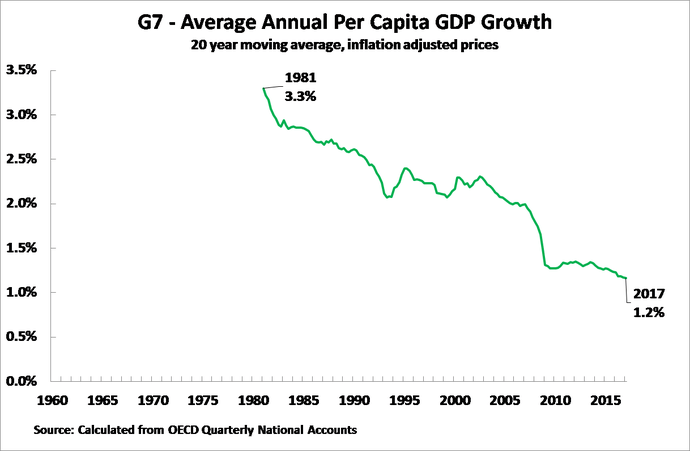 It is correct to point out that the final phase of recovery from the crash of 1929 was not achieved by ‘normal’ peaceful means. The period after 1938 was characterised by massive state intervention in the economy to prepare for and then wage war. But this fact does not alter economic reality. Economic expansion produced by massive state intervention, or oriented to war, is still economic growth. Furthermore, such growth, with the most important exception of the US, itself built on the rapid recovery already taking place after the post-1929 collapse. The fact is therefore clear that the period after 2007 will see far slower average growth than following 1929. 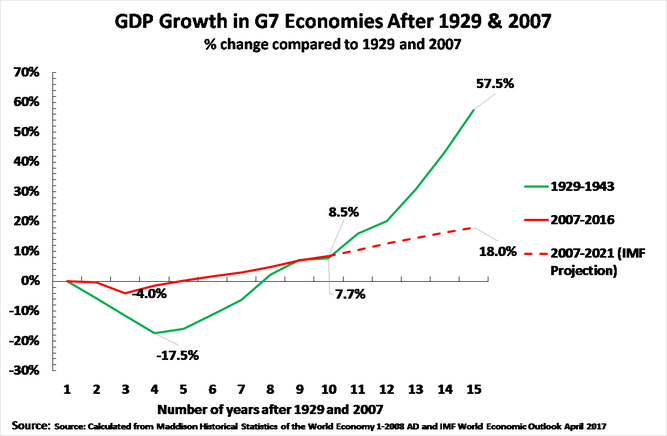 No recovery in the next periodFinally, it is important to note that the IMF predicts no acceleration of growth that will counteract the long-term slowdown in the Western economies. Indeed, the cumulative consequence of the prolonged period of slow growth will be intensified in the coming period. This is shown in Figure 4 – which illustrates the consequences of the IMF’s annual growth projections up to 2022. This shows that taking the year 2016 as a whole, annual average GDP growth in the G7 was 1.8% using a 20-year moving average. By 2022 this will have slowed to 1.5%. Per capita GDP growth will fall from 1.2% to 1.0% in the same period. In short, in terms of cumulative long-term growth the slowing of the Western economies will get worse in the next five years. In terms of per capita GDP, with only  only average 1.0% growth the major Western economies over a 20-year period will not be far from literal stagnation. 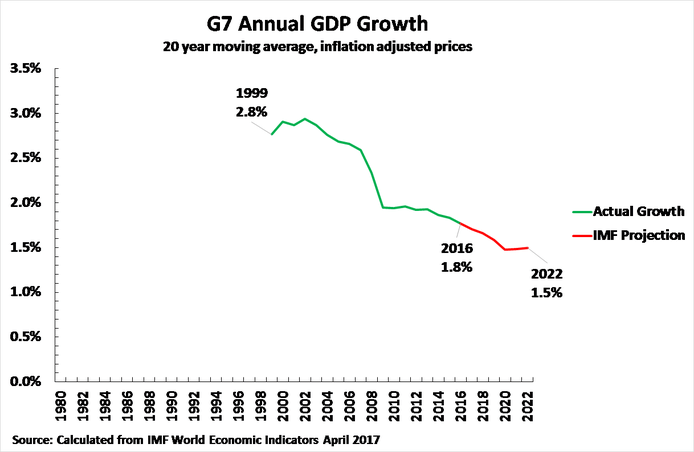 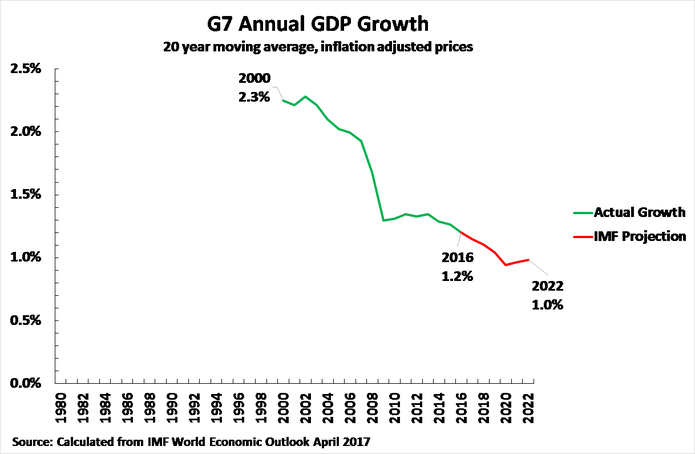 Situation of the G7 business cycleFinally, in order to accurately analyse the global economic situation that will face China, it is necessary to assess not only the medium/long term situation of the Western economies but also their position in the business cycle. As market economies inherently show business cycles average growth is created by continuous oscillations above and below the long-term average growth rate created by structural economic factors. This means that a period of above average growth will be followed by a period of below average growth and vice versa.
Figure 6 therefore shows both a 20-year moving average for an annual average G7 growth and the year by year rate. It may be noted that in 2016 G7 growth was very low, at 1.5%, which was below the long-term average of 1.8%. Purely for statistical reasons, therefore, it would be likely that in 2017 G7 growth would accelerate somewhat. The IMF’s prediction for G7 growth in 2017 is 1.9%, slightly above the long-term average. This precisely illustrates the way in which exceptionally slow growth in one year is compensated for by faster growth in following years and vice versa.
But, as was shown in Figure 4 above, this slight upturn in the business cycle in 2017 will not be sufficient to prevent the slowdown of medium/long term average G7 growth. Therefore, as outlined at the beginning of this article, China must be prepared for the following global economic context: 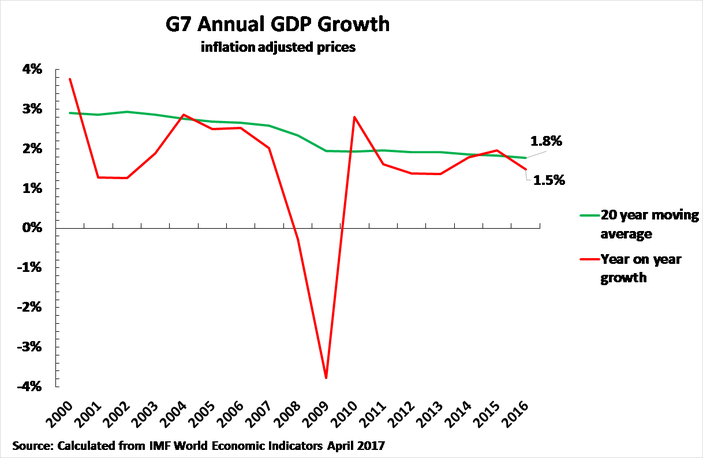 Conclusions
The economic conclusions regarding trends in the Western economies that will confront China are therefore clear. To recapitulate and expand the consequences of the trends already noted:

For China’s overall international situation the implications are also clear:

Given the extremely slow growth that will continue in the G7/Western economies there will therefore not be a ‘return to normal’ but political instability in the advanced Western economies will continue.
In conclusion it should again be emphasised that the data presented in this article does not come from an ‘anti-Western’ source but from a pillar of ‘Western orthodoxy’ – the IMF. Indeed, the IMF has been repeatedly too optimistic in its projections of growth in the advanced economies. Furthermore, fundamental theoretical analysis leads to exactly the same conclusions as the IMF – as shown in ‘Why the US Remains Locked in Slow Growth’.
It may be asked why the Western economies do not adopt policies that would lift them out of this slow growth – because such measures are available? Here, for reasons of length and focus, merely the fundamental factual data has been shown. It should merely be emphasised that with the policies currently adopted by the Western economies they will remain locked in the very slow medium/long term growth analysed in this article. The reasons for this are analysed in The Great Chess Game and can form the subject of a different article.
To summarise, there will therefore be a limited upturn of the Western business cycle in 2017, but the medium/long term growth of the Western economies, their ‘Great Stagnation’ will be even slower than after 1929. This is the fundamental international economic and geopolitical situation facing China.

*   *   *
The Chinese language version of this article was originally published at Sina Finance Opinion Leaders on 20 July 2017.

Why the economic reform succeeded in China & wil...

World mobilises against the US on Cuba – inclu...