Linkedin
Facebook
Twitter
The following article analyses in detail the relation between economic growth and human well-being. Its focus is a comparison of China with developing and advanced economies. However the key principles apply to all countries.
*   *   *
Recent discussion in China rightly emphasises that GDP growth is not the objective of national and social development – economic development is simply the means to achieve other ends of national rejuvenation and human well-being. But this undoubted truth immediately poses two other questions:

Such comparisons immediately settle another question. A new form of the attempt to ‘bad mouth’ China has appeared in the international media and among China’s ‘comprador intelligentsia’. Because attempts to claim China was heading for an economic ‘hard landing’ were shown to be completely false by events in 2016-2017, in parallel with the way they have also always been previously refuted, the new attempt to ‘bad mouth’ China is to claim that China’s social and environmental situation is negative and that this more than outweighs the advantages of achievements of economic growth. This issue will be analysed in detail later, but it may be noted immediately that international comparisons in fact show the reality is the exact opposite to such claims. China’s social situation, in terms of international comparisons, is even higher than that which would be expected from its level of economic development – i.e. from China’s per capita GDP. 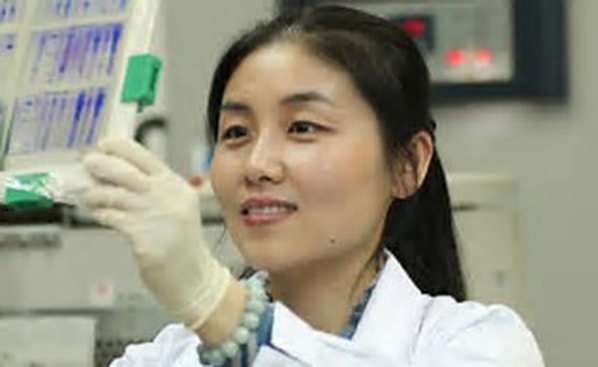 These facts are naturally not meant to imply that there are not real and well known social or environmental problems to be tackled in China, as is again discussed later. But it is to give a base for understanding these, to evaluate which problems are normal and any that are abnormal at China’s level of economic development, to see the means necessary to correct problems, and to show in a systematic fashion the distortions, in some cases lies, by China’s comprador intelligentsia.

Finally, as China’s goal is the achievement of a high-income society, an analysis is given of trends among high income economies. Establishing the facts regarding the latter is aimed to aid understanding which high-income societies are most usefully studied to draw both positive and negative lessons.

Life expectancy
It is well known to economists that the best and most comprehensive criteria for judging the overall impact of social and environmental conditions in a country is average life expectancy. Life expectancy sums up and balances the combined effect of all positive and negative economic, social, environmental, health, educational and other trends. Life expectancy is therefore a more adequate measure of social well-being than purely per capita GDP. As Nobel Prize winner Amartya Sen summarized regarding the relation between these different variables:

‘Personal income is unquestionably a basic determinant of survival and death, and more generally of the quality of life of a person. Nevertheless, income is only one variable among many that affect our chances of enjoying life… The gross national product per head may be a good indicator of the average real income of the nation, but the actual incomes enjoyed by the people will also depend on the distributional pattern of that national income. Also, the quality of life of a person depends not only on his or her personal income, but also on various physical and social conditions… The nature of health care and the nature of medical insurance – public as well a private – are among the most important influences on life and death. So are the other social services, including basic education and the orderliness of urban living and the access to modern medical knowledge. There are, thus, many factors not included in the accounting of personal incomes that can be importantly involved in the life and death of people.’

Life expectancy data sums up and balances all positives and negatives – a far more rigorous method than simply seizing on individual factors or anecdotes. In China, for example, to take negatives, it is known pollution is a damaging factor, symbolised by the publicity given to smogs in Beijing and other cities, while to take positives the OECD’s studies show China’s education system is strong in terms of international comparisons, and China’s strong advances in life expectancy after 1949 were correlated in time with great emphasis to primary levels of education and health care.

Factors in life expectancy
Turning to international comparisons, global data shows conclusively that the single biggest factor in a country’s life expectancy is per capita GDP. A long-term analysis of this is given in my book The Great Chess Game (一盘大棋? ——中国新命运解析) so in this article only the latest statistics from the World Bank are analysed – this new data however is fully in line with the longer term trends analysed in The Great Chess Game 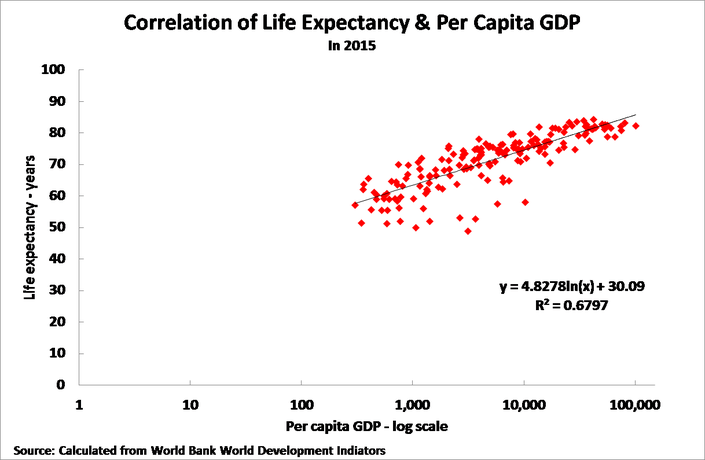 In more detail, as shown in Figure 2, analysing the official World Bank classifications of countries by their level of economic development: 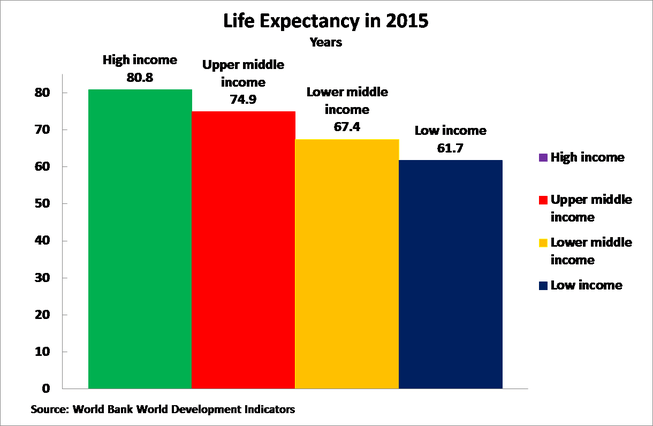 Non-economic factors
This fact that per capita GDP accounts for 68% of differences in life expectancy between countries, however, necessarily also means that 32% is accounted for by positive factors other than per capita GDP (e.g. good education, good health care, environmental protection) or negative factors other than per capita GDP (e.g. poor education, poor health care, pollution). How well, therefore, is China doing in terms of these other factors? Obviously as per capita income is the largest single factor in life expectancy China, as a developing country, cannot yet match the life expectancy of the advanced economies. But how is China doing compared to countries at a similar stage of economic development?
This can be measured in two ways.

​
The World Bank supplies data for  183 countries, constituting almost all the world’s population. Both of the comparative measures confirm China’s position is better than would be predicted by its level of economic development, i.e. its per capita GDP. As China, by World Bank classification, is an ‘upper middle-income’ economy’ the relevant comparison, in order to analyse the impact of social and environmental factors other than per capita GDP, is to make a comparison with other upper middle-income economies. This is shown in Table 1 below, which also gives data for the largest group of developing economies – the BRICS. An analysis of the situation with high income economies is also given below.

China’s comparative position
China’s predicted life expectancy from its per capita GDP is 73.3 years but China’s actual life expectancy is 76.0 years, a difference of 2.7 years – that is, people in China live over two and a half years longer than would be expected from its level of economic development. China ranks 72nd in the world in per capita GDP but 58th in life expectancy – that is China’s global rank in life expectancy is 14 places higher than its rank in per capita GDP, indicating that the overall effect of China’s social and environmental conditions is clearly positive.
Making a comparison of China with its direct peer group, that is upper middle income economies by World Bank classification, the average life expectancy for such countries, excluding China itself, is 73.6 years. Life expectancy in China is therefore 2.4 years longer than the average for other upper middle-income economies. The balance of China’s economic and social conditions therefore clearly adds significantly to its life expectancy compared to what would be expected from its per capita GDP.
Making a comparison specifically to large developing economies, the BRICS group, Figure 3 shows that China has the highest life expectancy of any BRICS country, despite Brazil and Russia both having higher per capita GDPs than China – all BRICS countries are upper middle-income economies by World Bank classification, except for India which is a lower middle income economy.
As an aside it may be noted that among the BRICS countries India also does well, although not as well as China, while Russia, Brazil and South Africa do badly. 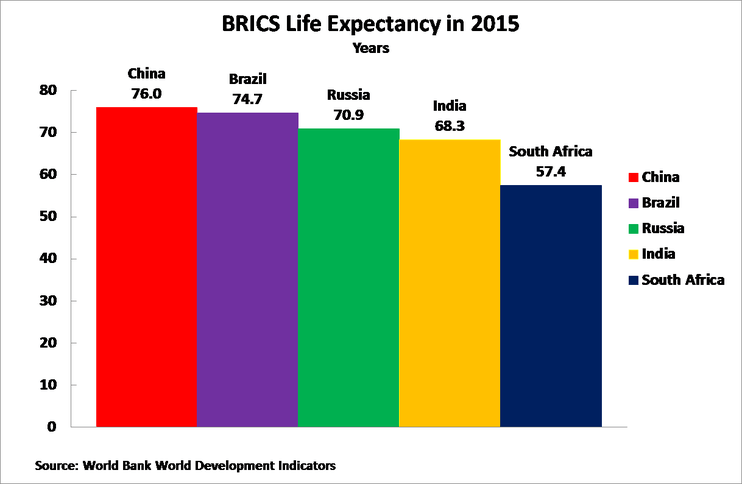 Excluding extremely small countries, whose situation is entirely different to China’s, the effect of social models and other factors among high income economies can be clearly seen. For example in the US life expectancy is 4.0 years shorter than would be expected from its per capita whereas in Spain it is 4.4 years longer. As a result although Spain’s per capita GDP is 54% lower than that of the US, Spain’s life expectancy is 4.6 years longer than the US – 83.4 years in Spain compared to 78.7 years in the US.
Therefore, while a high per capita GDP is a necessary condition for China to achieve a high life expectancy the choice of model of development, and other factors, will have a significant effect on China’s life expectancy. As significant number of high income economies are very small the focus here will be a comparison with large developed economies, the G7,  as these are evidently the relevant ones to compare to a country of China’s size.
​
The G7 Figure 4 therefore show life expectancy in the major advanced countries – the G7. This shows an average American has a life expectancy of only 78.7 years – compared to 83.8 years in Japan, 83.5 years in Italy, 82.7 years in France, 82.1 years in Canada, 81.6 years in the UK, and 81.1 years in Germany. The US is the only G7 country with a life expectancy of less than 80. 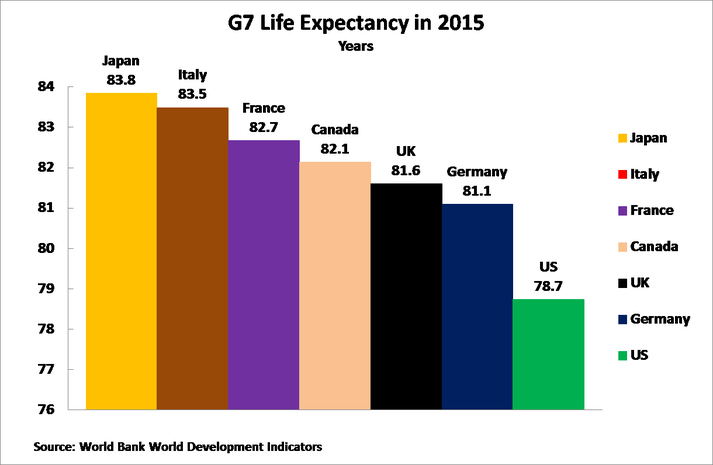 
Differences in social model
The fact Americans die earlier than those in the other major advanced economy shows that component parts of the American system – a US health care system which is private, US pollution, US poverty and interlinked ethnic discrimination, the US’s high level of civic violence, and other features mean Americans die far younger than would be expected from the country’s per capita GDP – and younger than in other comparable economies. It turns out the ‘American way’ literally subtracts from the life of Americans. No system which condemns its citizens to an early death could be called ‘the greatest’ as US politicians claim.

In contrast, as already noted, of the world’s 10 countries with the highest life expectancy all have high per capita GDP with seven being in Europe (Italy, Spain, Switzerland, Iceland, France, Sweden and Australia) and three in Asia (Hong Kong SAR, Japan and Singapore). For studying the combination of per capita GDP and non-economic factors these countries are therefore the key ones from which to draw positive lessons. It is therefore clear that if the goal is not highest per capita GDP, but the maximising of social well-being, then the lessons of the US model are negative while the lessons of Europe and some high income Asian countries are positive.

Conclusion
Finally, of course, the method of ‘seek truth from facts’ means this situation has implications for choices for China.

As all these, as has been seen, are literal matters of life and death for people study and accuracy on these issues is vital is vital for China’s goal of people centre development and the overall progress of its people.

*   *   *
This article was originally published in Chinese at Guancha.cn under the title ‘How Important is GDP Growth to the Well Being of the Chinese People’. (GDP增长对提升中国人幸福感有多重要？)

It is crucial for China’s perspectives, both economically and geopolitically, to have an accurate analysis of the trends ...
Read More →

On July 12, the Permanent Court of Arbitration in The Hague issued a pre-arranged declaration supporting some Philippines ...
Read More →

Comparison of Hong Kong and ‘poor whites’ in the US South

July 1st 2017 was the 20th anniversary of the correction of one of the great crimes against China ...
Read More →

​The IMF published this week the update of its projections for the main countries in the world ...
Read More →