Linkedin
Facebook
Twitter
President Trump has claimed he will persuade or force US companies such as Apple to relocate their production to the US – and move out of China. Apart from companies who may be prepared to make a few publicity gestures, which are peripheral to their main production activities, Trump has no chance of succeeding.

Because manufacturing strength in China no longer relies on low wages but on skills in management, logistics, and innovation. This article analyses China’s real strength in manufacturing and therefore why Trump won’t succeed to persuade Apple, or similar US companies, to relocate their production to the US from China. 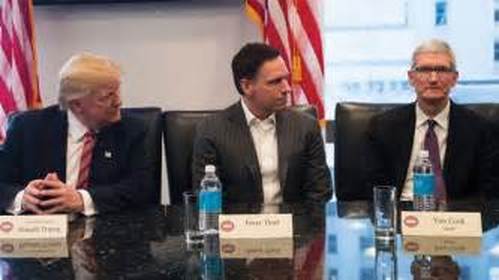 In the first decades after the start of China’s economic reforms in 1978, inward fixed investment (FDI) was primarily undertaken by foreign companies to create a base for exports. Although this was helpful in China’s early stage of “reform and opening up,” the investment was frequently very low value added. For example, China received only 2 percent of worldwide wages paid for iPod production despite the fact that every iPod, at that time the world’s most successful consumer product, was manufactured in China.

As recently as 2010, the majority of China’s exports came from foreign-owned companies. Among large exporters, the role of foreign investment was even greater – of the top 200 exporting companies in 2009, 153 were foreign-funded.

Chinese-owned companies were dominant among small and medium size exporters, and for example, Alibaba’s original success was creating the Internet systems that connect these Chinese companies to their foreign markets.

But as China’s economy has developed, the reason for its attractiveness to foreign companies has radically changed. In comparative international terms, China is no longer a low-wage economy. On World Bank data, only 30 percent of the world’s population now lives in countries with a higher per capita GDP than China, and wages will be approximately proportional to this. In Southeast Asia and South Asia, every developing country except Malaysia now has a lower per capita GDP than China.

For many exporters, China’s unrivalled skill in major manufacturing fields has become the country’s main attraction. A U.S. study, with the self-explanatory title “Why Apple builds iPhones (and everything else) in China,” spells this out clearly. The New York Times posed the question, “What does China have that America lacks?” The conclusion was:

‘”Quite a lot. China has more mid-level engineers, a more flexible workforce, and gigantic factories that can ramp up production at the drop of a hat. China also offers tech firms a one-stop solution. ‘The entire supply chain is in China now,’ a former high-ranking Apple executive tells The Times. ‘You need a thousand rubber gaskets? That’s the factory next door. You need a million screws? That factory is a block away. You need that screw made a little bit different? It will take three hours.'”
Duhigg and Bradsher in ‘‘How the US lost out in iPhone Work’’ in the International New York Times illustrate in detail that China’s decisive advantage no longer lies in low wages:

‘academics and manufacturing analysts estimate that because labor is such a small part of technology manufacturing, paying American wages would add up to $65 to each iPhone’s expense. Since Apple’s profits are often hundreds of dollars per phone, building domestically, in theory, would still give the company a healthy reward.

‘But such calculations are… meaningless because building the iPhone in the United States would demand much more than hiring Americans — it would require transforming the national and global economies. Apple executives believe there simply aren’t enough American workers with the skills the company needs or factories with sufficient speed and flexibility.

‘For Mr. [Tim] Cook, the focus on Asia ‘came down to two things,’ said one former high-ranking Apple executive. Factories in Asia ‘can scale up and down faster’ and ‘Asian supply chains have surpassed what’s in the U.S.’

Indeed, the example of the iPhone, now the world’s most successful consumer product, graphically shows how China’s manufacturing capability saved what is now a triumph from a potential PR disaster. As the New York Times noted:

‘A little over a month before the iPhone was scheduled to appear in stores, Mr. Jobs beckoned a handful of lieutenants into an office. For weeks, he had been carrying a prototype of the device in his pocket. Mr. Jobs angrily held up his iPhone, angling it so everyone could see the dozens of tiny scratches marring its plastic screen… People will carry this phone in their pocket, he said. … ‘I won’t sell a product that gets scratched,’ he said tensely. The only solution was using unscratchable glass instead. ‘I want a glass screen, and I want it perfect in six weeks.’ After one executive left that meeting, he booked a flight to Shenzhen, China. If Mr. Jobs wanted perfect, there was nowhere else to go.’

The reason China was the only destination was that as soon as Steve Job demanded a glass screen:

‘For years, cellphone makers had avoided using glass because it required precision in cutting and grinding that was extremely difficult to achieve. Apple had already selected an American company, Corning Inc., to manufacture large panes of strengthened glass. But figuring out how to cut those panes into millions of iPhone screens required finding an empty cutting plant, hundreds of pieces of glass to use in experiments and an army of midlevel engineers. It would cost a fortune simply to prepare.’

Apple’s problem was solved in the following way:

‘Then a bid for the work arrived from a Chinese factory.

‘When an Apple team visited, the Chinese plant’s owners were already constructing a new wing. “This is in case you give us the contract,” the manager said, according to a former Apple executive… It had a warehouse filled with glass samples available to Apple, free of charge. The owners made engineers available at almost no cost…

‘The Chinese plant got the job.’

Regarding iPhone production following this contract:

‘Apple had redesigned the iPhone’s screen at the last minute, forcing an assembly line overhaul. New screens began arriving at the plant near midnight…. Within 96 hours, the plant was producing over 10,000 iPhones a day… ‘The speed and flexibility is breathtaking,’ the executive said. ‘There’s no American plant that can match that.’

As the New York Times noted:

‘Another example: Apple had originally estimated that it would take nine months to hire the 8,700 qualified industrial engineers needed to oversee production of the iPhone; in China, it took 15 days.”

‘Wages actually aren’t that big a part of the cost of making consumer electronics… Paying American wages to build iPhones would add only about US$65 to the retail price of each handset, according to analysts’ estimates. That’s an amount Apple could likely afford. And in fact, China no longer offers rock-bottom wages. But when it did, it used that window ‘to innovate the entire way supply chains work,’ says Sarah Lacy at Pando Daily. China is now ‘a place other countries can beat on sheer cost, but not on speed, flexibility, and know-how.’

​This example of Apple reinforces the second fundamental feature of the new situation for China’s inward FDI, China has not only been an export base, but it has also been the world’s most rapidly growing market in dollar terms as well as in percentage terms. This will only continue. This is a result of the fact that although the U.S. remains the world’s largest economy, at market exchange rates, China’s growth rate is three times that of the U.S..

China’s unparalleled market expansion presents decisive advantages for potential company growth. In stagnant or more slowly growing markets, such as the U.S. and Europe, to achieve rapid growth most companies have to increase market share. In China, in contrast, rapid growth can be achieved wi
thout gaining market share but simply through ongoing market expansion – an easier prospect. FDI is therefore increasingly taking advantage of China’s domestic market, not for exports. A further result, consequently, is that FDI increasingly flows into the service sector, which primarily serves China’s domestic market and not exports. In 2013, 52 percent of inward FDI went into China’s service sector.

But if China’s market expansion is the world’s fastest, there is no doubt competition for companies engaged in FDI is becoming tougher in certain respects. In its earlier stages of development, China so badly needed FDI that it offered formal tax concessions and regulatory enforcement was sometimes lax. Tax concessions are already largely abolished, and lax enforcement is being tightened.

The latter includes dealing with criminality – in 2010 RTZ employees in China admitted taking kickbacks and recently GlaxoSmithKline was fined US$490 million after it was found to have bribed doctors to sell its drugs. Anti-competitive behaviour is also being clamped down on. Six infant milk powder companies were convicted of price fixing, and fined US$110 million, while 12 Japanese auto-parts makers were also fined US$200 million for the same offence.

Foreign companies investing in China continue to enjoy clear advantages in key sectors. These include in advanced technology industries, apart from defence – for example high end computer services and civil aircraft production; highly concentrated global industries dominated by global producers such as automobiles, and non-financial services in general – for example supermarkets and fast food chains. But in medium technology, or many rapidly growing industries, Chinese companies are increasingly tough competitors – Lenovo not only dominates China’s domestic computer market but has become the number 1 PC producer globally, while China’s smartphone manufacturers, such as Huawei are increasingly effective in domestic competition with Apple and Samsung.
​
Given the size and growth of China’s market, inward FDI will remain at very high levels. But the days of China as a cheap labour export base are ended, and it is increasingly China’s own domestic market which is the attraction for foreign companies. Foreign firms have to get into what is already the world’s most rapidly growing market, which within a decade will also be the world’s largest, but the full range of their competitive skills are increasingly required for this.

*   *   *
This article, under the title ‘Why Does Apple Makes the iPhone in China’ (为什么苹果在中国生产iPhone？), was originally published at Sina Finance Opinion Leaders on 20 October 2014. An introduction has been added and some further details from my book The Great Chess Game ( 一盘大棋? ——中国新命运解析)  has been incorporated into this version.

The damaging blind alley of US protectionism