Why do Western economies have hard landings but China doesn’t?

Linkedin
Facebook
Twitter
​Introduction
The media outside China periodically carries predictions of a China ‘hard landing’. For example George Soros grabbed headlines earlier this year by declaring of China: ‘A hard landing is practically unavoidable.’ Soros himself has an inaccurate record of investing in Communist Party led, and ex-Communist, countries such as Russia and China – having lost approximately $1 billion in Russia’s Svyazinvest telecommunications company. But similar claims regularly appear in other media.
To anyone dispassionately examining the facts these claims are extremely curious – as they are clearly the exact reverse of reality.  The facts show the only real modern serious economic ‘hard landings’ were not in China but in so called ‘Western’ economies – for example the US after 2007, Japan after 1990, Russia after the introduction of capitalism in 1991. China’s economy for example has not suffered a year of negative growth for at least half a century – in contrast to every major Western economy. Therefore, the real question which has to be explained, and which is examined here, is why do Western economies suffer ‘hard landings’ but China doesn’t? 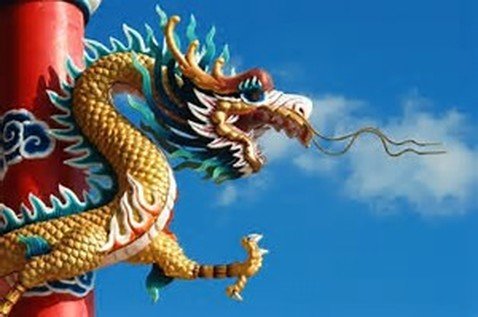 Defining a hard landing
First it is necessary to define what is meant by a serious ‘hard landing’ – as different usages exist in the Western media. Superficially there are two variants:

It will be seen, however, that the fundamental mechanism is the same in both cases. 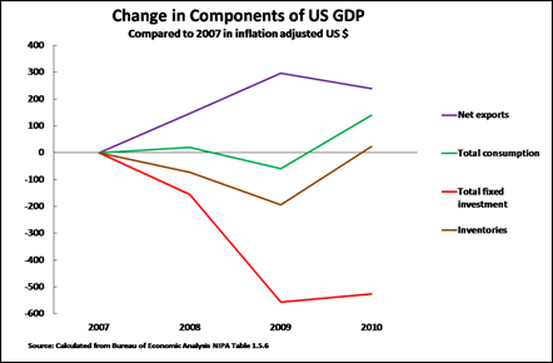 ​Japan’s post-1990 stagnation
Turning to Japan, since 1990 its annual average GDP growth has been only 0.9%. But Japan’s near stagnation over almost a quarter of a century was caused by entirely contradictory movements in different components of its economy. From 1990-2013, the latest World Bank internationally comparable data, Japan’s total increase in consumption was 41%, whereas Japan’s fixed investment fell 16% – see Figure 2. Japan’s annual average consumption rise was 1.5% while the average annual fixed investment fall was 0.8%.
The extreme severity of Japan’s stagnation was therefore due to its fixed investment decline.
Figure 2 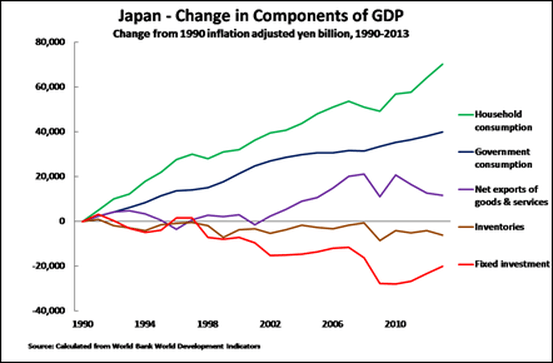 ​Russia’s post-1991 collapse and stagnation
After the introduction of capitalism in 1991 Russia suffered the worst peacetime collapse in a major economy since the Industrial Revolution. By 1998 Russia’s GDP was 39% below its 1991 level. Then, following a devaluation and default on Russia’s debts in 1998, on the basis of the now ended commodities price boom of the first decade of 21st century, Russia’s economy recovered from extreme collapse – but nevertheless overall in 1991-2014 Russia’s average annual GDP growth was only 1.0%. Russia may therefore be analysed as a ‘hard landing’ in either of the senses considered – an example of an extreme economic recession or, over the longer term, as an example of stagnation.
This case of Russia after 1991 is particularly crucial for China given that Russia followed the theory proposed by Chinese neo-liberals and as advocated at the time by the World Bank. The claim was that privatisation would aid economic development as it would increase efficiency – in technical economic terms that Total Factor Productivity (TFP) would increase. Leaving aside any reasons for this, Russia’s TFP did indeed increase – taking the latest available data, Russia’s TFP during 1992-2014 increased by an annual average 0.9%, which was higher than any advanced major economy. But this increase in TFP was entirely overwhelmed by the consequences of negative trends in Russia’s investment which produced first an unprecedented peacetime economic collapse and then almost a quarter century of net economic near stagnation.
During the period of economic collapse from 1991-98, during which GDP fell 39%, both Russia’s household and total consumption rose in inflation adjusted prices by 1 trillion roubles above 1991 levels, whereas fixed investment declined to 4 trillion roubles below it – fixed investment fell by 81%. It was therefore the investment decline which caused Russia’s unprecedented economic collapse.
Taking the whole period since the restoration of capitalism, by 2014 Russian total consumption in inflation adjusted prices was 8 trillion roubles above its 1991 level while fixed investment was 2 trillion roubles below its 1991 level. It was this fall in investment which therefore accounted for Russia’s prolonged stagnation – i.e. only 1.0% overall growth over almost a quarter of a century during the 1991-2014 period (See Figure 3).
In summary both Russia’s economic collapse, and its prolonged stagnation, were dominated by negative trends in fixed investment – precisely as in the US post-2007 and Japan post-1990. An increase in TFP was overwhelmed by the investment fall – that is any ‘micro-economic efficiency’ produced was entirely crushed by the ‘macro-economic inefficiency’ of the investment collapse, producing Russia’s economic disaster. 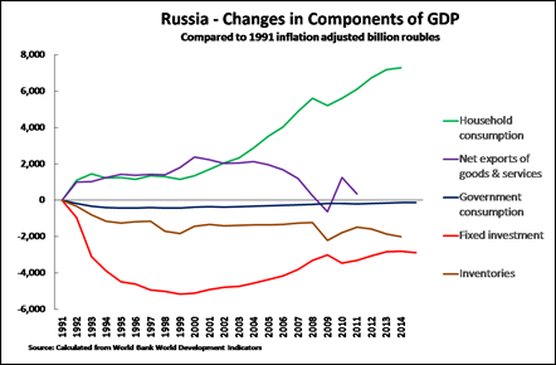 ​The above data therefore make clear the mechanism by which the US, Japan and post-1991 Russia suffered severe, in some cases catastrophic, economic ‘hard landings’ – and in turn why China does not. The reason such severe falls in investment, causing ‘hard landings’, are possible in Western economies is because the overwhelming bulk of major companies, and therefore of fixed investment, are privately owned. Under such conditions the state therefore has no mechanisms sufficient to stop such investment collapses. In short these countries suffered ‘hard landings,’ driven by the investment collapses, because they were capitalist economies.
In China, in contrast, there are diverse forms of ownership but with a dominant state sector. This is the structure reaffirmed at the 3rd Plenum of the Central Committee of the 18th Congress of the CPC in November 2013: ‘We must unswervingly consolidate and develop the public economy, persist in the dominant position of public ownership, give full play to the leading role of the state-owned sector.’1 It was reiterated by Xi Jinping at a session of this year Chinese People’s Political Consultative Conference, by stating in China public ownership plays a dominant role with diverse forms of ownership developing side by side.2
Therefore, China possesses a large state sector which can be used to raise investment if the government requires to take anti-recessionary measures. In China existence of this state sector, which is ‘dominant’ not in the sense of being the majority of the economy but of being large enough to give the state the ability to set the overall investment level, therefore gives to China the means to halt or reverse an investment decline. In summary, China does not suffer a hard landing, that is an investment collapse, because it is not a capitalist but a socialist economy.
The reason neo-liberals engage in ‘stereotyped speech’, and avoid using numbers, is because this macro-economic efficiency of China’s ability to use its state sector to control investment levels, and also to avert hard landings, is far greater than any micro-economic processes neo-liberals attempt to point to. If China’s state sector lost its ‘dominant’ position due to privatisation, that is its ability to set the overall investment level, China would no longer have the mechanisms able to avert hard landings of the US, Japan and Russian type.
It is sufficient to compare post-2007 trends in China and the US, that is following the onset of the international financial crisis, to see the contrast between the two economic systems. Taking annual data, to allow a comparison of China and the US, US private fixed investment fell by 22% between 2007 and 2009, whereas China’s fixed investment rose by 35%. As a result, while annual US GDP fell by 3% China’s GDP rose by 20% – the trends for the US were shown in Figure 1 and those for China are shown in Figure 4. In 2007-14 China’s fixed investment rose by 105% creating economic growth of 81%.
Figure 4 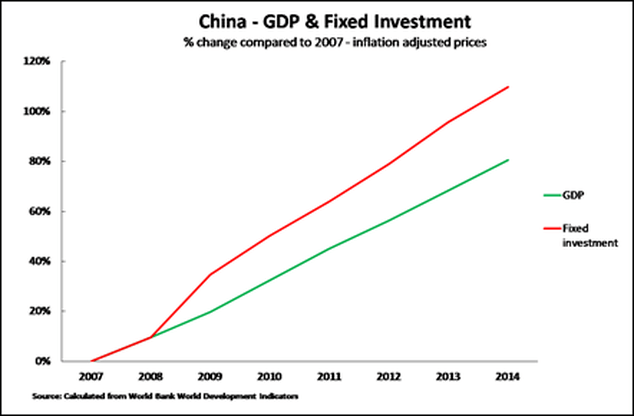 ​In short, in China as in the West, it is fluctuations in fixed investment which determine whether hard landings occur (as in the West) or whether these can be averted (as in China). As the Wall Street Journal noted accurately, probably without understanding the significance of what it described: ‘Most economies can pull two levers to bolster growth: fiscal and monetary. China has a third option. The National Development and Reform Commission can accelerate the flow of investment projects.’
But the reason China has such a third mechanism of accelerating (or decelerating in the case of overheating) this flow of investment projects, which no Western economy possesses, is because of its dominant state sector – i.e. because China is a socialist and not capitalist economy. It is this ability to pull the ‘lever’ of investment, due to the large state sector, in contrast to the US, Japan, and Russia’s investment declines, which means that these latter countries have ‘hard landings’ while China does not.
But it is this large state sector which, of course, distinguishes China from any capitalist economy. Most fundamentally China hasn’t and doesn’t suffer ‘hard landings’ because it is a socialist not a capitalist economy.
​*   *   *
A slightly edited version of this article originally appeared in Chinese at Sina Finance Opinion Leaders on 28 March 2016. No developments since that date alter its analysis.