Two articles by the distinguished US historian Bruce Cumings have been published in the Guardian newspaper in London and the London Review of Books, dealing with the history of US policy in Korea and its attacks on North Korea.

These articles, ‘A Murderous History of Korea’, in the London Review of Books, and ‘Americans once carpet-bombed North Korea. It’s time to remember that past’ in the Guardian, are recommended in the strongest terms to be read in full. They deal in detail with Korean resistance against Japanese occupation, US repression in creating South Korea, US carpet bombing of North Korea – which was greater than its attacks on Germany and Japan during World War II, and the US role in creating the South Korean state. To give a flavour of the articles, and to encourage them to be read in full, excerpts from Cumings two articles are given below. They have been arranged from the two articles in chronological order of the events which Cumings describes. They therefore form a short history of the main periods of US involvement with Korea leading up to the present crisis. The first, second and fourth extracts are from the London Review of Books, the third is from the Guardian.

*    *    *
Professor Bruce Cumings
Korean resistance against Japanese occupation
After Japan annexed Korea in 1910, many Koreans fled across the border, among them the parents of Kim Il-sung, but it wasn’t until Japan established its puppet state of Manchukuo in March 1932 that the independence movement turned to armed resistance. Kim and his comrades launched a campaign that lasted 13 difficult years, until Japan finally relinquished control of Korea as part of the 1945 terms of surrender. This is the source of the North Korean leadership’s legitimacy in the eyes of its people: they are revolutionary nationalists who resisted their country’s coloniser; they resisted again when a massive onslaught by the US air force during the Korean War razed all their cities, driving the population to live, work and study in subterranean shelters; they have continued to resist the US ever since…The story of Kim Il-sung’s resistance against the Japanese is surrounded by legend and exaggeration in the North, and general denial in the South. But he was recognisably a hero: he fought for a decade in the harshest winter environment imaginable, with temperatures sometimes falling to 50° below zero.
​
US creation of the South Korean regime
‘US involvement in Korea began towards the end of the Second World War, when State Department planners feared that Soviet soldiers, who were entering the northern part of the peninsula, would bring with them as many as thirty thousand Korean guerrillas who had been fighting the Japanese in north-east China… It [US occupation] lasted three years. To shore up their occupation, the Americans employed every last hireling of the Japanese they could find, including former officers in the Japanese military like Park Chung Hee and Kim Chae-gyu, both of whom graduated from the American military academy in Seoul in 1946. (After a military takeover in 1961 Park became president of South Korea, lasting a decade and a half until his ex-classmate Kim, by then head of the Korean Central Intelligence Agency, shot him dead over dinner one night.) After the Americans left in 1948 the border area around the 38th parallel was under the command of Kim Sok-won, another ex-officer of the Imperial Army…
​
​Inside the South itself – whose leaders felt insecure and conscious of the threat from what they called ‘the north wind’ – there was an orgy of state violence against anyone who might somehow be associated with the left or with communism. The historian Hun Joon Kim found that at least 300,000 people were detained and executed or simply disappeared by the South Korean government in the first few months after conventional war began. My own work and that of John Merrill indicates that somewhere between 100,000 and 200,000 people died as a result of political violence before June 1950, at the hands either of the South Korean government or the US occupation forces… In short, the Republic of Korea was one of the bloodiest dictatorships of the early Cold War period; many of the perpetrators of the massacres had served the Japanese in their dirty work – and were then put back into power by the Americans.’ 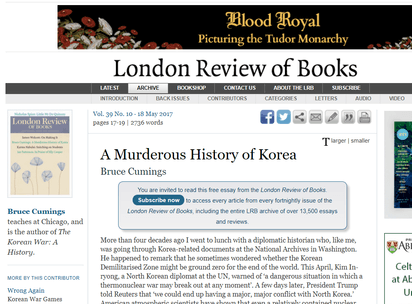 ​The US bombing of North Korea
‘It was 64 years ago that North Koreans emerged from this war into a living nightmare, after three years of “rain and ruin” by the US Air Force. Pyongyang had been razed to the ground, with the Air Force stating in official documents that the North’s cities suffered greater damage than German and Japanese cities firebombed during World War II.
‘Just as Japan scholar Richard Minear termed Truman’s atomic attacks “exterminationist,” the great French writer and filmmaker Chris Marker wrote after a visit to the North in 1957, “Extermination crossed this land.” It was an indelible experience still drilled into the heads of every North Korean.
‘On my first visit to Pyongyang in 1981, a guide quickly brought up the bombing and said it had killed several of his family members. Wall posters depicted a wizened old woman in the midst of the bombing, declaring “American imperialists – wolves.”‘The day after Trump’s bluster, the DPRK government stated: “The US once waged a tragic war that plunged this land into a sea of blood and fire, and has been leaving no stone unturned to obliterate the DPRK’s ideology and system century after century.”
​
‘There are 25 million human beings living in North Korea. They bleed like we do, they live and die like we do, they love their kin like we do. Trump’s callous and cavalier threat was perhaps the most irresponsible thing he has said since becoming president (which is really saying something), but most Americans will not know this because they know nothing about the carpet-bombing of North Korea. 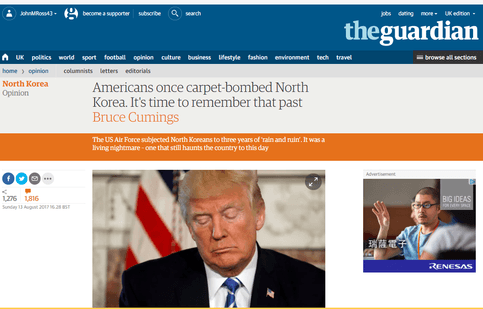 US introduction of nuclear weapons into Korea
For 25 years now the world has been treated to scaremongering about North Korean nuclear weapons, but hardly anyone points out that it was the US that introduced nuclear weapons into the Korean peninsula, in 1958; hundreds were kept there until a worldwide pullback of tactical nukes occurred under George H.W. Bush. But every US administration since 1991 has challenged North Korea with frequent flights of nuclear-capable bombers in South Korean airspace, and any day of the week an Ohio-class submarine could demolish the North in a few hours.