US economic growth under Trump – explained in 3 charts

Linkedin
Facebook
Twitter
There has been much discussion on the likely effect of Trump on the US economy. But some of this discussion fails to distinguish clearly between short term and long term effects of Trump. This can lead to wrong interpretations of events and trends as they unfold. The aim of this article is therefore to set out the fundamental parameters of the US economic situation as it confronts Trump. This can be clearly shown in three charts showing the fundamental features of the US economy which are given below. These show:

Analysing these most fundamental trends in the US economy also identifies which key US data must be watched carefully to assess the success or failure of Trump’s economic policy in both the short and long term.
​
The long-term slowing of the US economy
To start with the most fundamental trend of US long term growth, Figure 1 shows US annual average GDP growth using a 20-year moving average to remove all purely short term fluctuations due to business cycles. This data shows clearly the most profound trend in US growth is a half century long economic slowing – the peaks of US growth progressively falling from 4.9% in 1969, to 4.1% in 1978, to 3.5% in 2003, to 2.2% by the latest data for the 1st quarter of 2017. 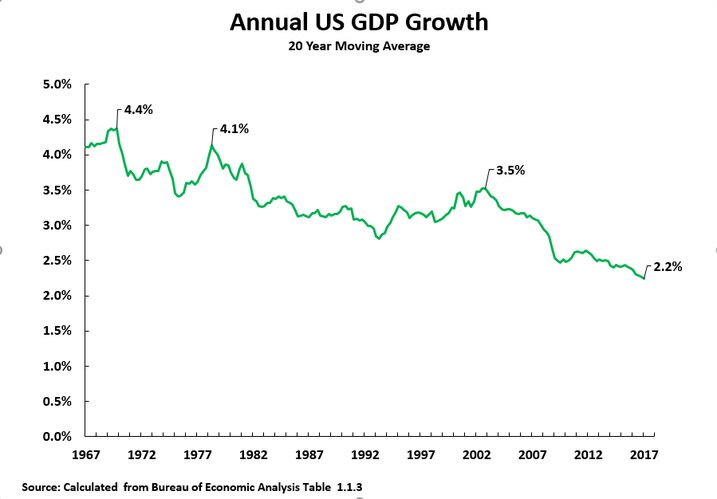 ​The cyclical situation of the US economy
Turning to short term developments, the trend of US growth shown in Figure 1 is a long-term average. This necessarily means that short term economic growth is sometimes above and sometimes below this average. Figure 2 therefore shows the short-term trend in US growth, the economy’s year by year growth rate, compared to the long-term average.
It may be seen from Figure 2 that the US economic growth in the year to the 3rd quarter of 2016 was 1.7% and in the 1st quarter of 2017 it was still only 2.1%. That is, the US economy in the period leading up to Trump’s election was growing at significantly below its long-term trend. For this reason, purely for statistical reasons, it is probable that the US economy may accelerate in the short term.
As this would coincide with the initial period of Trump’s presidency this would lead to the claim ‘Trump is improving the US economy’. But this is false, such acceleration would be expected purely for statistical reasons.
Figure 2 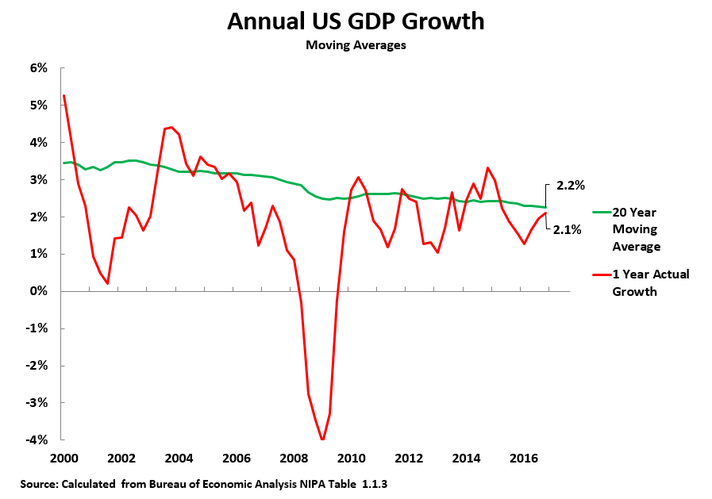 This trend therefore shows the fundamental issue confronting Trump which he would have to overcome to accelerate the long-term growth of the US economy. Unless he can engage in large scale foreign borrowing, which is difficult for reasons analysed in ‘The Economic Logic Behind Trump’s Foreign Policy – Why the Key Countries are Germany and China’, Trump would have to increase the percentage of capital creation in the US economy. Without this, while a short-term speed up in the US economy is to be expected for the statistical reasons given earlier, no long term acceleration of US economic growth will take place. Without such a sharp increase in the level of capital accumulation claims by Trump that he will accelerate the US rate of growth are purely ‘hot air’.

Summary
It is clear that the first effect of Trump’s policies will not be to increase but to reduce US savings/capital accumulation. This is due to the fact that an economy’s savings are not only household savings but company savings plus household savings plus and government savings – government savings in most economies being negative because the government runs a budget deficit. Trump has announced policies that will clearly increase the US budget deficit – tax cuts focussed on the rich and increased military spending. This increased budget deficit will necessarily reduce the US savings level.
In the purely short term Trump could lessen the effect of low US savings/capital creation by borrowing from abroad. But historical experience shows that over the medium/long term in major economies it is domestic capital creation which is decisive. Therefore, Trump has so far announced no policies which will increase the long-term US growth rate. Therefore, in summary:


Finally, these trends show which data must be closely watched to see success or failure in Trumps economic policies. The short term shifts in the growth rate must not be seen in themselves but compared to the long term trend of US growth: the key variable for judging long term US growth is whether the level of capital formation in the US economy is rising or falling.

*   *   *
This article was originally published in Chinese by New Finance 25 January 2017. Apart from updating data to the 1st quarter of 2017 no other change has been made to the article. For a more detailed explanation of the prospects for the US economy see ​‘Why the US Remains Locked in Slow Growth’.

American politicians remorselessly claim that theirs is the 'greatest country' and the 'American way' is the best way. ...
Read More →

My book La Gran Ruta de China (in Spanish) has been published as an ebook. This ebook is ...
Read More →

Few issues show more clearly the real difference between the pro-human oriented policies of socialism in China and ...
Read More →

​Attempts are sometimes made to claim that China’s gigantic economic growth, the greatest in a major economy in human ...
Read More →

What China achieving ‘moderate prosperity’ means for itself & the world