Linkedin
Facebook
Twitter
It is crucial for China’s perspectives, both economically and geopolitically, to have an accurate analysis of the trends in the US economy. The publication of the latest revised US GDP figures is therefore important as it provides the latest opportunity to verify these developments. This data confirms the fundamental trends in the US economy under Trump:

This article analyses these economic trends in detail, considers some of their geopolitical consequences for China and their impact on domestic US politics.

US GDP and per capita GDP growth
In the 1st quarter of 2017 US GDP was 2.1% higher than in the first quarter of 2016.  Making an international comparison to other major economic centres: 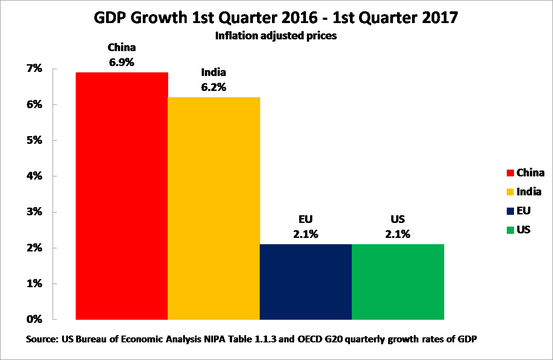 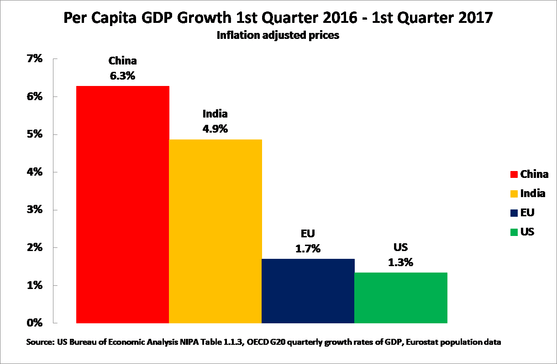 ​Business cycle
In order to  accurately evaluate the significance of this latest US data it is necessary to separate purely business cycle trends from medium/long term ones – as market economies are cyclical in nature failure to separate cyclical trends from long term ones may result in seriously distorted assessments. Purely cyclical effects may be removed by using a sufficiently long term moving average that cyclical fluctuations become averaged out and the long term structural growth rate is shown. Figure 3 therefore shows annual average US GDP growth using a 20-year moving average – a comparison to shorter term periods is given below.
Figure 3 clearly shows that the fundamental trend of the US economy is long-term slowdown. Annual average US growth fell from 4.4% in 1969, to 4.1% in 1978, to 3.2% in 2002, to 2.2% by 1st quarter 2017. The latest US GDP growth of 2.1% clearly does not represent a break with this long-term US economic slowdown but is in line with it.
Figure 3 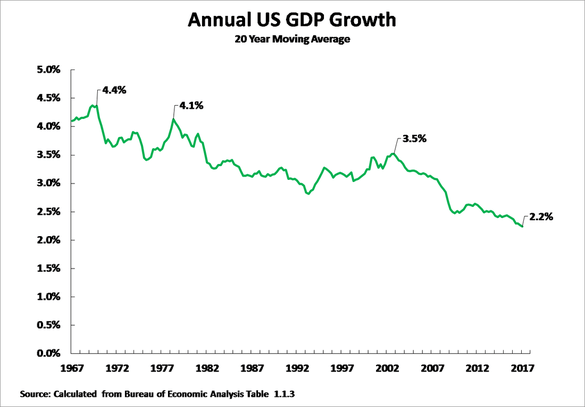 ​Cycle and trend
Turning from long term trends to analysis of the current US business cycle, it may be noted that a 5-year moving average of annual US GDP growth is 2.0%, a 7-year moving average 2.1% and the 20-year moving average 2.2%. Leaving aside a 10-year moving average, which is greatly statistically affected by the severe recession of 2009 and therefore yields a result out of line with other measures of average annual growth of only 1.4%, US average annual GDP growth may therefore be taken as around 2% or slightly above. That is, fundamental structural factors in the US economy create a medium/long term growth rate of 2.0% or slightly above. Business cycle fluctuations then take purely short-term growth above or below this average. To analyse accurately the present situation of the US business cycle therefore recent growth must be compared with this long-term trend.
Figure 4 therefore shows the 20-year moving average for US GDP growth together with the year on year US growth rate. This shows that in 2016 US GDP growth was severely depressed – GDP growth in the whole year 2016 was only 1.6% and year on year growth fell to 1.3% in the second quarter. By the 1st quarter of 2017 US year on year GDP growth had only risen to  2.1% –  still below the 20-year moving average.
As US economic growth in 2016 was substantially below average a process of ‘reversion to the mean’, that is a tendency to correct exceptionally slow or exceptionally rapid growth in one period by upward or downward adjustments to growth in succeeding periods, would be expected to lead to a short-term increase in US growth compared to low points in 2016. This would be purely for statistical reasons and not represent any increase in underlying or medium/long US term growth. This normal statistical process is confirmed by the acceleration in US GDP growth since the low point of 1.3% in the 2nd quarter 2016 – growth accelerating to 1.7% in 3rd quarter 2016, 2.0% in 4th quarter 2016 and 2.1% in 1st quarter 2017.
Given the very depressed situation of the US economy in 2016 therefore some increase in speed of growth may be expected in 2017 for purely statistical reasons connected to the business cycle.
Figure 4 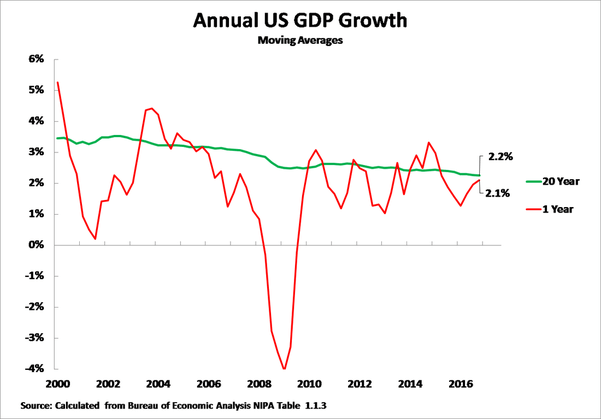 To keep this article short only a factual summary of the key recent trends within the US economy are given here. A detailed analysis of why the US remains locked in slow medium and long term economic growth is given in my article ‘Why the US economy remains locked in slow growth’. A long term historical analysis of US growth and its relation to economic growth theory may be found in my book The Great Chess Game (一盘大棋? ——中国新命运解析).

*   *   *
This article was originally published in Chinese at New Finance.
Note
(1) For economic specialists’ differences between the way GDP data is presented in the US and in China are explained here.
Some Chinese media reported US GDP growth in 1st quarter 2017 as 1.4%. This reflects the way the US Bureau of Economic Analysis presents the data –  ‘ ‘Real gross domestic product (GDP) increased at an annual rate of 1.4 percent in the first quarter of 2017’ But it is not sufficiently widely understood that US GDP data is presented in a different way to China’s data.
US data in the above form is presented as the percentage growth between one quarter and the next on an annualised basis. That is, the new US data in that form is presented as the growth of 1st quarter 2017 compared to 4th quarter 2016 presented on an annualised basis. Actual US GDP growth between 4th quarter 2016 and 1st quarter 2017 was 0.35% on a seasonally adjusted basis –  1.4% on an annualised basis.
China however emphases presentation of GDP growth year on year growth – China’s GDP growth of 6.9% in 1st quarter 2017 was the change compared to 1st quarter 2016.
​What may appear a technical issue has considerable significance due to a serious and known problem in the US data. The US method has the disadvantage that for accurate data the seasonal adjustment between quarters must be correct – different quarters of the year have features which strongly speed or slow growth in that period. But as is widely known among Western analysts the seasonal adjustment in US data for the 1st quarter of the year is inaccurate as it understates growth – the US statistical authorities are aware of this but have not so far succeeded in resolving the problem. To avoid this, it is better to use the system of comparing the 1st quarter of 2017 with the 1st quarter of 2016 – as this automatically avoids the need for seasonal adjustment. On that basis US year on year GDP growth was 2.1% not 1.4%. In order to avoid understating US growth this 2.1% is used in this article.

China’s socialist economy will deal with the g...