The US is attempting to impose an international ‘economic dictatorship’

The US issuing almost simultaneously a series of economic ‘demands’ to China, and withdrawing from the nuclear arms agreement with Iran and re-imposing sanctions on that country, has now led to very wide layers understanding that actions by the US administration are at present attempting to de facto impose an international ‘economic dictatorship’.This is a sharp turn in international opinion because this understanding goes far beyond those who are opponents of the US or are in general favourable to China.  Analysis must therefore understand this turn clearly. 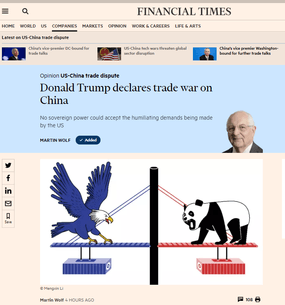 ​
​US economic moves against China
Taking first US economic steps against China, it is worth quoting Martin Wolf, as he is chief economic commentator of the Financial Times and one of the most influential journalists in the West – one who is not at all aligned with China. Wolf’s attack on US economic proposals to China can only be described as savage. It is therefore worth quoting to understand the full force of his attack.

Under the title ‘Donald Trump declares trade war on China – no sovereign power could accept the humiliating demands being made by the US.’ Wolf noted:

‘The Trump administration has presented China with an ultimatum on trade. That is what the US’s “draft framework” for the trade talks with Chinese officials in Beijing last week actually is. China could not accede to its demands. The US administration is either so foolish that it does not understand this or so arrogant that it does not care.

‘What is to be made of these [US] demands? The call for a reduction of the bilateral deficits by $200bn (up from $100bn) is ridiculous. It would require the Chinese state to take control over the economy — precisely what, in other respects, the US demands it not do.

‘It is a violation of the principles of non-discrimination, multilateralism and market-conformity that underpin the trading system the US created. It should be ashamed of itself. It ignores the overwhelming probability that this will not reduce overall US deficits, particularly given US fiscal irresponsibility. It ignores the inevitable adverse effects on third countries.
‘The demand that China have exactly the same tariffs as the US is almost as ridiculous. There is no economic case for such a policy…

‘China could never accept the idea that the US may prevent it from upgrading its technology.

‘The notion that the US may insist on unrestricted access for investment in China while reserving the right to restrict Chinese investment, as it wishes, must also be unacceptable.

‘Finally, the idea that the US will be judge, jury and executioner, while China will be deprived of the rights to retaliate or seek recourse to the WTO is crazy. No great sovereign power could accept such a humiliation. For China, it would be a modern version of the “unequal treaties” of the 19th century…

‘Americans who are better aware of the national interest than the administration need to understand that the US will find itself on its own if it seeks conflict. That is what must happen when a leader turns into a self-regarding bully.’

Iran
Even many forces in the West who did not understand as clearly as Wolf the unacceptable nature of US demands on China were however clarified on the character of the present US international economic approach by the US threat to re-impose economic sanctions on Iran after US withdrawal from the nuclear pact with that country. The Financial Times analysed:

‘A French senior diplomat said: “The US administration announced a gradual reinstatement of the sanctions. We’re going to do everything, in connection to our companies, to defend their interests.” …

‘The US withdrawal “is going to cause considerable economic difficulties, but beyond those economic problems, it’s a matter of principle, to have extraterritorial sanctions,” Mr Le Maire told radio France Culture….

‘In a sign of the gulf between Washington and its European allies opened up by Mr Trump’s repudiation of the accord, Mr Le Maire said: “The international reach of US sanctions makes the US the economic policeman of the planet, and that is not acceptable.”

‘German foreign minister Heiko Maas warned that the US exit from the Iran agreement would undermine trust in international agreements.

‘“The nuclear agreement increased security, and the US exit now threatens to decrease security. It also threatens to undermine trust in international treaties,” he said.

‘In a statement the EU said: “The lifting of nuclear-related sanctions is an essential part of the agreement. The EU has repeatedly stressed that the sanctions lifting has a positive impact on trade and economic relations with Iran. The EU stresses its commitment to ensuring that this can continue to be delivered.”

The US earlier withdrawal from the Paris Climate Change Accord had been opposed by all other Western countries but the effect of this, because it was perceived as relating relating to a longer-term problem, the immediate implications of which were not so clearly understood, produced less immediate impact than the US threats against China and Iran.

Shared future for humanity
In responding to these actions, and the very widespread opposition they have created, a key concept is China’s ‘common future for humanity’. What is happening is that by attacking so many groups of people present US policy is now facing opposition from many layers that are not always automatically friendly to China. The present US policy is in a sense an ‘attack on the people of the world’ – an economic attack on China, a threat to stability and peace in the Middle East against Iran, an attack on numerous countries on climate change. On all these issues – the approach to China, Iran, policy in the Middle East, climate change – present US policy is opposed by an overwhelming majority of countries and of the world’s population. Even in countries where US pressure may force their governments not to actively oppose US policy there is a sharp turn in public opinion against US policy. In summary international discontent with US policy has sharply risen.
​
But simultaneously, showing the importance of the approach of a ‘common future for humanity’, there is a direct interconnection between China’s national interests and those of other countries. Opposition by other countries to any present attempt by the US administration to establish an ‘economic dictatorship’ for the world aids China’s opposition to unjust US demands against it. Simultaneously, China is the strongest individual country with progressive positions, corresponding to the general interests of humanity, on all these issues. It will therefore be key for China’s foreign policy and diplomacy to find the way to cooperate with all those forces opposing any attempt to impose an ‘economic dictatorship’ on the world. China’s skill in this will be decisive not only for itself but for many countries and for humanity as a whole.

*   *   *
This article was originally published in Chinese at Sina Finance Opinion Leaders.

BRICS are more important for world growth than the G7