Linkedin
Facebook
Twitter
The importance of the Belt and Road (B&R) summit for China and participating countries is well known. What is not so widely grasped is that the B&R region is now by far the most powerful locomotive not only of the regional but of the global economy. To be precise:

Growth in the B&R region, in summary, will dwarf that in North America and Europe.
This fact that the B&R region has now emerged as the most powerful locomotive of the world economy is due to two simultaneous developments:

The aim of this article is therefore to put more precise orders of magnitude on these trends. The data used is the five-year growth projections of the IMF. It should be made clear that using these figures does not at all mean that they are being taken as a 100% accurate prediction of what will occur. But the IMF data clearly establishes that the economic growth potential of the B&R region is so much greater than that of either North America or Europe that entirely implausible assumptions of future development patterns would have to be made for the far stronger growth of B&R not to be strikingly apparent.
This data therefore clearly establishes that the B&R region will be the main locomotive of the global economy during the next period.
​
Slow growth in the Western economies
​The first feature creating this new situation in the international economy is the quite extraordinarily low growth in the Western economies by historical standards. The statement sometimes made in the Chinese media that the period commencing with the international financial crisis of 2008 is the West’s ‘worst economic crisis since the Great Depression’ is somewhat misleading put in that form as in one crucial way it understates the problem.  The overall slow growth and stagnation in the Western economies is already almost equivalent to that after 1929 while the factual projections for the next five years lead to the conclusion that the cumulative slow growth/stagnation of the Western economies will be worse, although different in form, from that during the following 1929. To  show this Figure 1 illustrates three sets of data:

The data in Figure 1 of course shows that the onset of the ‘Great Depression’ after 1929 was far more violent than that of the international financial crisis in 2008. After 1929, during only three years, overall GDP of the advanced Western economies plunged by 15.6% compared to only 3.3% after 2007.
But it is not so widely understood that after the initial post-1929 economic collapse recovery during the 1930s was rapid and post-crisis growth was strong – the US being the most important exception. This can be clearly seen in Figure 1 and by examining the situation in 1938, the last year before World War II. By a convenient statistical coincidence, 1938 was nine years after 1929, and 2016, the most recent year for current factual data, was nine years after the last pre-international financial crisis year of 2007. Therefore, in comparing 1929-38 with 2007-16 the same length of time is being analysed.
The strong recovery of most advanced economies following the post-1929 recession is demonstrated by the fact that by 1938 the GDP of most major advanced economic centres was substantially above 1929 levels. To be precise by 1938: 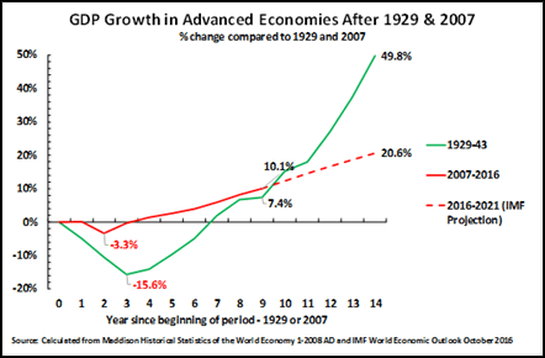 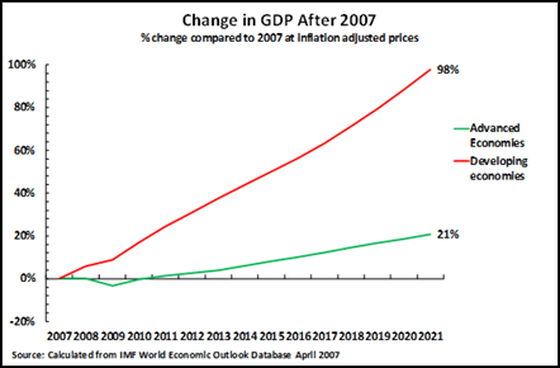 ​The B&R
Turning specifically to the B&R, which as will be seen is the most powerfully growing region among the developing economies, this is of course closely connected with China – which is now one the three great centres of the world economy with the US and the EU.
Comparing these three economic centres it is well known that measured at current exchange rates China’s economy is smaller than either the US or the EU – in 2016 China’s GDP was $11.2 trillion compared to $16.4 trillion for the EU and $18.6 trillion for the US. Measured in PPPs China’s economy is actually larger than the US but to avoid discussion of PPP calculations, and because data on savings is not available in PPPs, in this article all measures are at current exchange rates unless specified otherwise.
However, while China’s GDP is smaller than the US or EU it is not yet sufficiently widely understood that China already enjoys a decisive advantage over these other economic centres in one decisive field –  savings, that is finance for investment. Furthermore, China’s considerable lead in this will get bigger with time. As shown in Figure 3 by 2016 China total annual savings – that is the sum of company saving, household saving and government dissaving – was $5.1 trillion compared to $3.5 trillion for the US and $3.6 trillion for the EU. By 2021 on IMF projections China’s annual finance created for investment will be $6.9 trillion, compared to $4.2 trillion for the EU and $4.0 trillion for the US.
In summary, while China’s GDP is smaller than the US China has already overtaken the US as a financial ‘superpower’. It is this which enables China to take initiatives such as AIIB and international fixed investment and infrastructure initiatives which are crucial in the B&R.
Figure 3 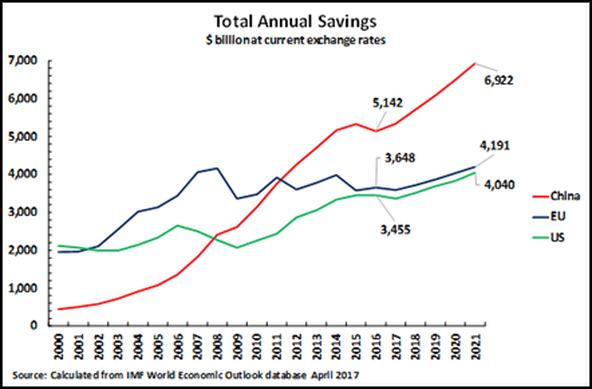 B&R as locomotive
Based on these economic fundamentals the comparative growth potentials of the B&R region, North America and Europe may now be analysed. As B&R is a regional initiative  IMF data for North America, including Canada and Mexico, is given – rather than simply that for the US. For Europe the European Union (EU) as a whole is taken. Given this framework then:
Figure 4 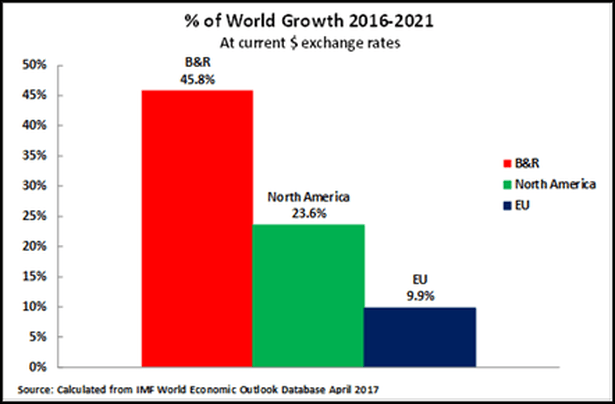 The situation in 2016
Turning now to the impact of the different growth potentials in the main world economic centres on the structure of the global economy,  as a starting point Figure 5 shows that in 2016 the GDPs of the B&R region and the North American region were approximately equal in size while the EU was slightly smaller than either – B&R being equivalent to 27.5% of World GDP, North America 28.1%, and the EU 21.8%.
Figure 5 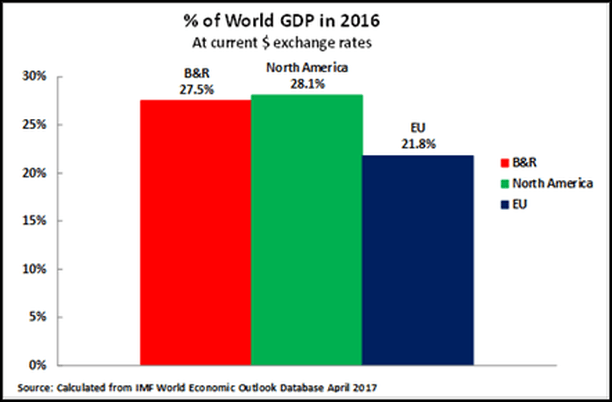 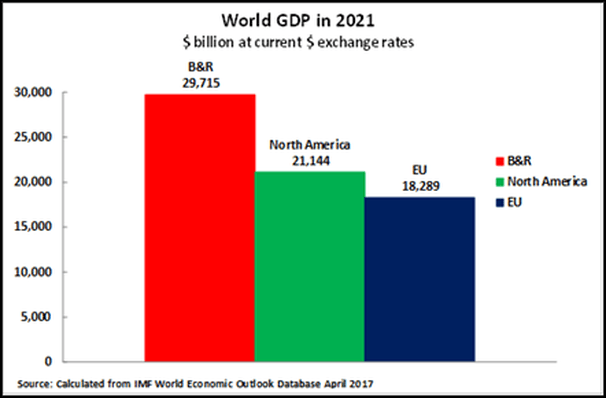 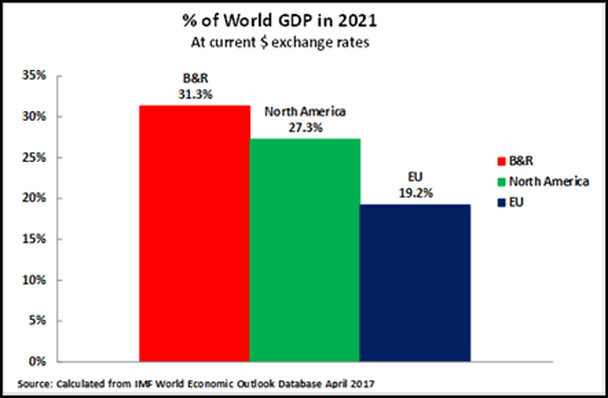 Can another country block B&R?
The fundamental economic data also makes clear why no other individual country can block the success of B&R – specifically India cannot block B&R. This is due to the fact that while B&R is open to numerous countries economic realities make clear which countries are indispensable for B&R’s success.
Four large economies are within the B&R region – in descending order of GDP size China, India, Russia and Indonesia.  Together these make up 79% of the GDP of the B&R region in 2016 and 85% of its projected growth in 2016-2021. However no other country makes up even 5% of the GDP of the B&R region or 2% of its projected growth – therefore no single other country than these four is by itself large enough to ensure the B&R initiative did not succeed.
Of these four large economies Russia and Indonesia are strong supporters of B&R and their presidents will attend the Beijing summit. India is therefore the only large economy in the B&R region which has indicated at the time of writing it will not participate in the Beijing summit.
This reticence is regrettable, and India’s enthusiastic participation in B&R would undoubtedly strengthen B&R. But in 2016 India was only 11% pf the B&R region’s GDP and 15% of its projected growth in 2016-2021. Put in other terms, 89% of the GDP of the B&R region and 85% of its growth potential was outside India. Given this weight India could not block B&R’s development even although its participation would be extremely valuable.

Tasks for the B&R
These macroeconomic trends naturally do not mean there are no problems for B&R. The advantage of North America and the EU is that their per capita GDPs are much higher than the B&R region, and both NAFTA and the EU have an institutional structure which B&R does not have nor is projected to have at present.  But the much greater growth performance in the B&R region compared to any other, and therefore the vastly greater market expansion of the B&R region than any other, is much stronger than the institutional framework of the relatively stagnant North American and European economic centres.
It is clear that the B&R region is aided by, and can build on, the existence of a number of partial institutional frameworks within its area. These include the Association of South East Asian Nations (ASEAN), the Shanghai Cooperation Organisation (SCO), the existing Eurasian Economic Union (EAEU – Russia, Belarus, Kazakhstan, Armenia, Kyrgyzstan) and the Asian Infrastructure Investment Bank (AIIB). The wider proposed initiatives include the Regional Comprehensive Economic Partnership (RCEP) promoted by China. The wider concept of a Eurasian Union promoted by President Putin clearly overlaps with the B&R – as President Putin states.
The Beijing summit on 14-15 May will therefore have numerous tasks to work on not only its own projects but building and integrating existing initiatives. But the reshaping of the world economy by the B&Rs much greater growth potential than any other region is clear.

Conclusion
It may be seen from the data above that the differences in growth potential between the B&R and other major economic centres are not small – that is within the margin of error of five year economic forecasting . On IMF data projections:

No plausible margin of error therefore alters the fundamental fact that in the next five years the B&R region will be by far the most important locomotive of the world economy. In particular, that the growth potential of the B&R region far exceeds that of North America and Europe. This reality  must therefore be the basis of economic strategy in the coming period.

Why the US economy is slowing – how it will affect t...

The US is attempting to impose an international ‘eco...