Linkedin
Facebook
Twitter
American politicians remorselessly claim that theirs is the ‘greatest country’ and the ‘American way’ is the best way. But if so it poses a puzzling question – ‘why do American’s die so young’? The significance of the question can easily be seen by looking at the facts.
​
Figure 1 show life expectancy in the major advanced countries – the G7. An average American has a life expectancy of only 78.7 years – compared to 83.8 years in Japan, 83.5 years in Italy, 82.7 years in France, 82.1 years in Canada, 81.6 years in the UK, and 81.1 years in Germany. The US is the only G7 country with a life expectancy of less than 80. So, if the ‘American way’ is the ‘greatest’ it means that Americans chose to die young – an apparently bizarre choice.
Figure 1 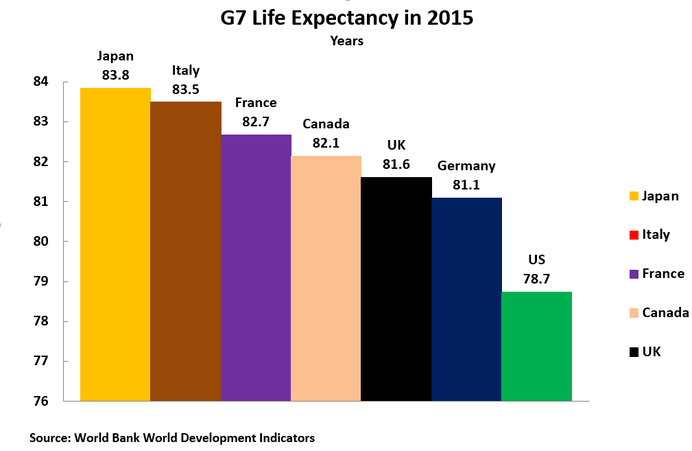 But detailed examination shows the situation of the US is even more serious. Life expectancy is the most sensitive of all indicators of overall social well-being because it sums up in a single figure all positive social trends (high income, good health services, good education, environmental protection etc.) and all negative ones (poverty, bad education, poor health services, pollution etc.).

​International data shows clearly that the single biggest factor in a country’s life expectancy is per capita GDP – in 2015 this explained 68%% of differences in life expectancy.

Indeed per capita GDP is quite literally a matter of life and death. A person in a low-income economy by World Bank standards lives 61 years and 8 months, while a person in a high-income economy lives 80 years and 10 months – a difference of 19 years. Interestingly the difference in life expectancy between poor and rich borough in US and UK cities is also around 20 years.

​To show how much shorter US lives are than would be expected from US per capital income two methods can be used – each of which yields the same essential result.
​ 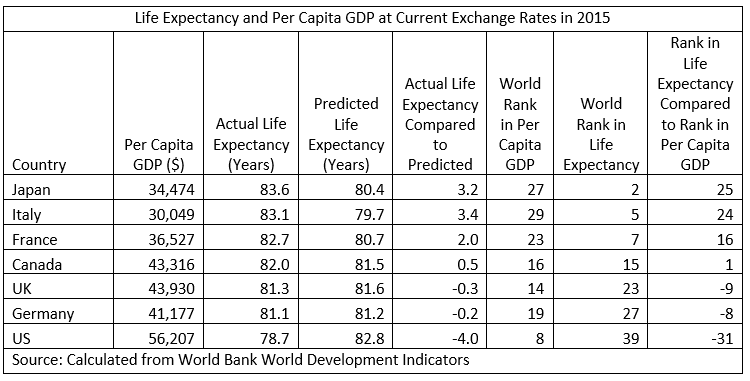 Which brings us back to the starting point. Common sense of course shows that Americans have no aberrant desire to die early. Like everyone else they would like to live as long as possible. The fact Americans die earlier than those in the other major advanced economy is simply showing that the combined effects of the US private health care system, US pollution, US poverty and interlinked ethnic discrimination, the US’s high level of civic violence means Americans die far younger than would be expected from the country’s per capita GDP – and younger than in other comparable economies. It turns out the ‘American way’ literally subtracts from the life of Americans.

​This, of course, has implications for choices for China.As China’s GDP grows its life expectancy will increase. But some people urge China to adopt features of the ‘US model’ as it develops – a system based on private medicine, no welfare state etc. But why should China adopt a model in which its citizens will die earlier than in other advanced economies? And if China is to adopt a model, as it develops, in which its citizens are condemned to an earlier death than necessary shouldn’t this be explained clearly to China’s people?

People in China, of course, in this are no different to other people. They would actually prefer what Americans would if given the choice – to live the longest possible lives. Therefore looking at the question of ‘why do Americans die so young’ has very important implications for China itself.
​
​And for Americans it turns out that Americans lives are victims of the ‘American way’.

*   *   *
The original Chinese version of this article appeared at Sina Finance Opinion Leaders of 22 August 2017.

The truth about China’s crucial role World War II is...

Why do Cubans live longer than Americans?

Why China will grow rich long before it grows old

Despite himself Trump admits the superiority of Chin...