Reality & myth of the US ‘internet revolution’

Linkedin
Facebook
Twitter
​China is speeding up still further its ‘internet revolution.’ From the viewpoint of China’s overall economic strategy premier Li Keqiang has launched the concept of ‘Internet Plus’ – emphasising integrating the mobile Internet, cloud computing, big data and the Internet of Things with manufacturing and e-commerce. To further boost Internet use the premier recently urged China’s telecommunications operators to enhance Internet speeds and cut prices.
China’s still greater emphasis on the internet is even more impressive as it is in a context that China already has by far the world’s greatest number of internet users – 642 million in 2014, compared to the US’s 280 million and India’s 243 million. From a global perspective 21% of the world’s internet users are in China compared to 9% in the US. 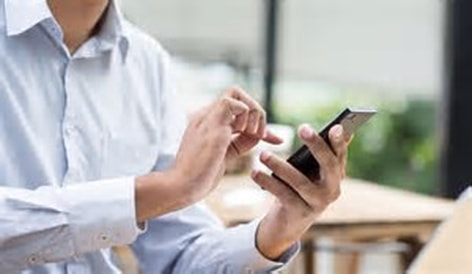 Equally striking is the build-up of China’s investment in Information and Communications Technology ( ICT) of which the Internet is at the core. Over the last two decades China’s investment in ICT was already generating 1.0% a year total GDP growth – out of an average 8.8% annual expansion. As the Table shows over the last 20 years China’s annual GDP growth created by ICT investment was already significantly higher than any other major industrial or BRIC economy – for example two thirds higher than the US, over twice that of Germany and three times that of Japan. 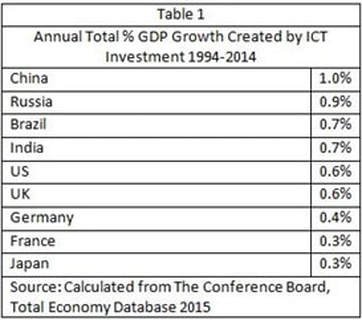 ​But even given this high level of achievement China’s further push into the internet is vital for economic strategy. In a modern economy the internet has expanded far beyond its original use with computers to become the most rapidly growing sector of telecommunications, retailing, and application to advanced manufacturing – hence the key idea of ‘Internet Plus’.
But despite China’s already highly impressive internet and ICT performance, because China is a developing economy the percentage of China’s population using the internet, however, is still lower not only than the US or Europe but also than developed Asian countries. In 2014 internet users were equivalent to 46% of China’s population compared to 87% for the US, 86% in Japan, and 92% in South Korea. In China internet price is key for expanding its use further – hence the premier’s drive to reduce internet usage costs.
Precisely because the internet is so vital for China’s development it is crucial to separate reality from myth in its development. This requires study of the lessons of the US – the world’s most advanced internet and ICT economy. As the internet is crucial for a modern economy there have been numerous international studies of the internet’s development in the US and its effect on economic efficiency. These arrive at clear conclusions showing why expanding internet use and ICT investment are inextricably interlinked.
From a fundamental economic perspective it is important to understand that it is not the pure technology of the Internet and ICT by itself which increases productivity and economic growth. Nobel Economics Prize winner Robert Solow already noted in a famous phrase in 1987, six years after the beginning of the mass introduction of personal computers into the economy, that computer technology was not speeding up US productivity growth: ‘You see the computer age everywhere but in the productivity statistics.’
This has not changed. As Figure 1 shows in 1980, the year before introduction of the modern personal computer, US annual productivity growth was 1.2% – taking a five year average to remove the effects of short term business cycle fluctuations. By 2014 US productivity growth was still only 1.2%. Therefore 34 years of revolutionary technological developments in the Internet and ICT had led to no increase in US productivity!
Indeed the latest US figures are worse. In May Federal Reserve Chairwoman Janet Yellen admitted the US was experiencing ‘relatively weak productivity growth.’ In 2014 despite publicity about iPhones, Apple Watches, Google, e-tailing etc. US productivity increased by only a snail like 0.5%.
The data therefore clearly shows that technological advance in the internet and ICT sector alone do not lead to productivity increases. 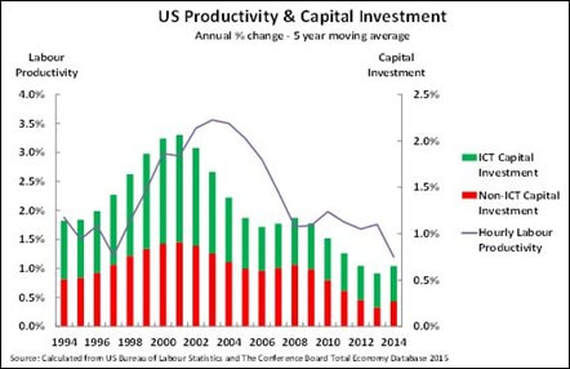 ​But it can be seen there was one phase during the 34 years of the internet and ICT revolution when US economic efficiency sharply increased. In the period leading to 2003 US annual productivity growth reached its highest level in half a century – 3.6%. This was explained by a huge surge in ICT focused fixed investment. US investment rose from 19.8% of GDP in 1991 to 23.1% of GDP in 2000, fell slightly after the ‘dot com’ bubble’s collapse, and then reached 22.9% in 2005. The majority of this investment was in ICT. After this US investment fell, leading to the sharp productivity slowdown.
The way in which US labour productivity followed this surge in capital investment is clear from the chart. The correlation between the growth in investment and the increase in labour productivity three years later was 0.86, and after 4 years 0.89 – extraordinarily high. When capital investment fell this was followed by a decline in labour productivity – showing clearly it was not ideas or pure technology that had caused the productivity increase.
China’s present drive to increase still further the centrality of the internet in its economy is therefore vital. But the lesson of the US is that it was not purely the ideas or technology of the internet that led to rapid economic efficiency growth but embodying these in a massive investment wave focussed on ICT. This is therefore a key lesson for China to study as it seeks to accelerate even further its own ‘internet revolution’.
​*   *   *
This article originally appeared in Chinese on Sina Finance’s ‘Opinion Leaders’ on 18 June 2015. A shortened version appeared in English at China.org.cn.

The US is attempting to impose an international ‘eco...