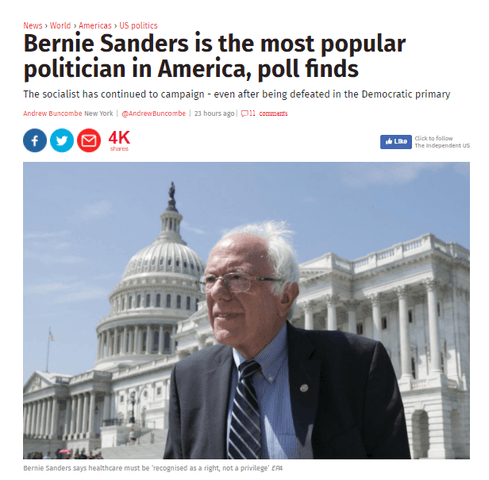 ​An opinion poll has reaffirmed that the most popular politician in the US is a socialist – Bernie Sanders. As Vice reports:

‘A new poll found that among all other notable American senators, representatives, and even the president, Bernie Sanders reigns supreme as the most popular politician in the nation…

‘The Harvard-Harris Poll—an online survey conducted from August 17 to 22—culled responses from 2,263 voters who lean both left and right, along with those who identify as nonpartisan. It asked about their feelings on the Democratic and Republican parties, the biggest political moments of the past few weeks, and what issues matter most to them. It also quizzed them on America’s politicians, asking how favorably or unfavorably they viewed certain lawmakers….

‘Sanders—who’s long held the distinction of the country’s most popular politician—earned the honor once again. The poll found 54 percent of voters view him favorably, while just 36 percent feel the opposite. No other politician netted support from a majority of US voters.’

The Hill, an influential US political website, noted this poll was carried out by a totally mainline polling organisation: ‘The Harvard-Harris Poll is a collaboration of the Harvard Center for American Political Studies and The Harris Poll. ‘

​The roots of these new shifts in US politics were analysed on this website in ‘The “Anglo-Saxon” Political Crisis – from Reagan & Thatcher to Trump & Brexit’.