​Two events in the US in last week – the victory of Steve Bannon backed candidate Roy Moore in the Alabama Republican Senate primary and the huge dispute around NFL players kneeling during the national anthem – confirm the deepening polarisation in US politics. The background which is driving this is the very slow growth in the US economy – the reasons for which are analysed in ​Why the US Remains Locked in Slow Growth. 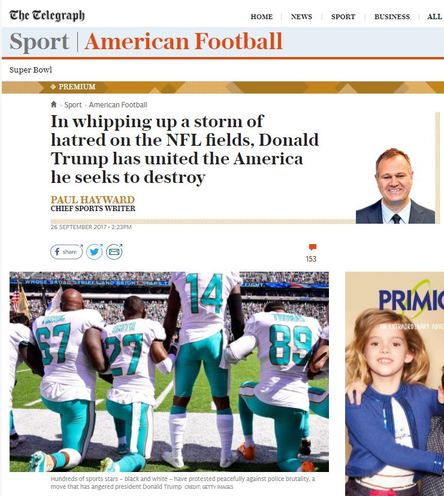 ​’None of these outcomes were particularly surprising, yet all three point in the same direction: The GOP [Republican Party] establishment finds itself in a particularly uncertain moment — in control of all of government but unable to get anything done or control the forces that helped elect President Trump…

‘Trump… is still well liked by Republican voters. National polls show his approval rating with Republicans at around 80 percent. Polls of Alabama Republicans showed something similar….

‘Moore won, in large part, because he was the more Trumpian candidate in this race. Like Trump, Moore has a history of taking on the establishment. He ran against an incumbent Republican governor in 2006. Moore also has a history of making controversial and racially tinged statements, and was backed by a number of the most pro-Trump elements of the Republican Party, including Steve Bannon and Sarah Palin.’

​Bannon, in a long interview with Charlie Rose on Bloomberg, made clear that he saw Moore’s campaign as part of a long march of Bannonite forces to capture the Republican Party – the cutting edge of such forces is racism within the US and call for a US ‘economic war’ with China internationally.

Trump immediately attempted to align himself with the Bannonite forces by tweeting out support for Moore after his victory – despite Trump having supported Moore’s opponent. Trump tweeted: ‘Congratulations to Roy Moore on his Republican Primary win in Alabama. Luther Strange started way back & ran a good race. Roy, WIN in Dec!’

​On the other side of the US political spectrum the campaign by US National Football League (NFL) players, and other athletes and artists, against police murder of black Americans, maintained and deepened itself against the tirade of abuse unleashed on Twitter by Trump and in pro-Trump media.

​Again the situation was accurately outlined – this time by Paul Hayward in the Daily Telegraph: ‘The demonic strategist in Trump’s head spotted an opportunity when Colin Kaepernick’s decision to drop to one knee for the Star-Spangled Banner began to catch on as a means of drawing attention to the shooting by police of unarmed black Americans. The nature of the protest, which stirred the country’s deepest sensitivities about the stars and stripes, allowed the White House to bury the original grievance under a tide of nationalistic and racially-framed indignation.

​’As Americans discuss the weekend’s mass NFL protest with a fervour striking even by the standards of Trump’s volcanic reign, the most pressing need was to dig out those founding objections from the sludge of the president’s tirades…

‘A colleague in America reports that within one hour of listening to a Boston radio station he heard the protesting NFL players called “thugs, morons, idiots and dummies.” Trump of course called every one of them a “son of a bitch” who should be hauled off the field and fired. He said it in Huntsville, Alabama, in the same deep south where he claimed there were some “fine people” at a Neo-Nazi demonstration in Charlottesville…

​’When Stevie Wonder went down on one knee before a concert in Central Park, Congressman Joe Walsh tweeted that he was “another ungrateful black multi-millionaire.” ….
​
​’ Inequality, the mass incarceration of young black males, and police shootings, are seen by many as the next episode in that national story, and explain the feelings that just happened to find an outlet through Kaepernick and the NFL. Black males between 15-34 are nine times more likely to be killed by law enforcement officers than other Americans…

​’the debate raged after this weekend’s protests, which are spreading across American sport… The Trump presidency is being acted out on many battlefields – North Korea, his relationship with Russia – but historians may yet trace its end in part to the time he set out to stigmatise athletes whose prime objective was to stop others from their communities being shot through the windows of cars by police officers routinely excused by the justice system.’

​This radicalisation affecting US sport is reflecting the same processes that has led to an openly declared socialist, Bernie Sanders, becoming the most popular politician in the US – something which would have been inconceivable in the US twenty years ago.

Trump has no ability to create fast US growth

​This deepening cl
ash in the US will continue because Trump has no effective means to create fast growth in the US economy. This clash will be long and hard because history shows the US political establishment is extremely powerful and ruthless with numerous means at its disposal for dealing with opponents ranging from promotion of politicians who engage in progressive talk in order to disguise reactionary international and domestic policies, such as Hillary Clinton, through to assassinations
(Martin Luther King, Malcolm X, numerous African-Americans).

​This clash in the US is of huge concern not only to Americans but to all countries in the world – given the persistent record of US military intervention abroad and the disasters that has created in Iraq, Libya and elsewhere. It also confirms why ‘anti-Americanism’ is one of the world’s most stupid policies. In the fight against ruthless forces within the US political establishment those people in the US who are fighting against it are one of the world’s most important allies. It is therefore a very serious mistake to refer to the ‘United States’, as though it were an undifferentiated force, without seeing the different groups within it.

​Mao Zedong, constantly stressed that the people of the world, including the people of China, had no argument with the people of the US – unlike their very real difference with the US political establishment. Using the vocabulary of the 1960s he also expressed the situation clearly: ‘The evil system of colonialism and imperialism arose and throve with the enslavement of Negroes and the trade in Negroes, and it will surely come to its end with the complete emancipation of the black people.’

​Now, when very serious political struggles are taking place in the US, which will continue for a prolonged period, it is necessary simultaneously for people outside the US to abandon any foolish and counter-productive ‘anti-Americanism’ and support progressive forces in the US, and for progressive forces in the US to see powerful allies internationally precisely in countries which are the targets by the US political establishment.