​The IMF published this week the update of its projections for the main countries in the world economy for this year and next. This showed:

These new projections, particularly for 2017, were based on hard facts. They came as a result of actual economic growth in both China and the US in the first half of the year. This data is not only important in itself but because it shows that while China attempts to pursue the method of ‘seek truth from facts’, regrettably numerous US foreign policy analysts have adopted an ‘ostrich method’ – to put their heads in the sand and ignore reality.
The aim of this article is to show the scale of the gap which now exists between reality and the current analysis of many US foreign policy experts – and note the dangers which flow from this.

China’s latest economic data
Starting with the factual data, as widely reported China’s second quarter 2017 GDP data, and data for the month of June, showed solid strong growth on the key indicators. Compared to the same period in the previous year taking the latest data:

It is important to note China’s performance exceeds any major Western economy by a large margin. To give a comparison, US year on year GDP growth to the first quarter of 2017 was 2.1%, and when the new US 2nd quarter GDP data is published it will probably show year on year growth of under 3%.
The international impact of this data should be clearly understood. China continues to be the main locomotive of the world economy. The IMF in its new update to its economic forecasts predicts this year that China’s economy will grow at 6.7% and the US by 2.1% – revising China upwards from the earlier prediction of 6.6% and revising the US downwards from the earlier prediction of 2.3%. Based on the first half year’s data both these latest projections appear approximately accurate. This downward revision of the projection of US growth by the IMF of course strongly confirms the analysis made in my book The Great Chess Game (一盘大棋? ——中国新命运解析) and updated earlier this year in ‘Why the US Remains Locked in Slow Growth’
Translating these growth rates into contributions to world economic expansion, predictions at current exchange rates are difficult due to the well-known problems in predicting short term currency movements (anyone who could regularly accurately predict short term exchange rate movements would be so rich they would make Bill Gates look like a pauper!). For example, the IMF predicted that China’s RMB would fall against the dollar by 3.5% this year while at the time of writing it has actually risen by 2.9%.
But at comparable international prices, purchasing power parities (PPPs), which automatically compensate for fluctuations in exchange rates, the IMF predicts than in 2017 China’s contribution to world GDP growth will be slightly over twice that of the US – China contributing 26% of world growth and the US 13%.
Taking other major international economic centres, the IMF projects India will contribute 13% of global growth, the same as the US, and the EU 11%.
As analysed in ‘Why the US Remains Locked in Slow Growth’ US economic growth in 2016, at 1.6%, was extremely low, and significantly below the annual average US growth of 2.2% over the last 20 years.  Year on growth to the 1st quarter of 2016 of 2.1% was also below this long term average – as shown in Figure 1 . Therefore, for purely statistical reasons some moderate upturn of the US economy from 2016’s extremely low level is likely. The IMF’s new projection of 2.1% for 2017 as a whole is therefore likely to be a reasonable approximation. But this means that China’s economy in 2017 will grow three times as fast as US.
To summarise, China’s first half year economic data therefore confirms both its own strong growth and that it is by far the biggest contributor to world economic expansion. US economic growth in contrast has been far weaker. This lies behind both the IMFs new upward revision for China’s growth and downward revision for the US. 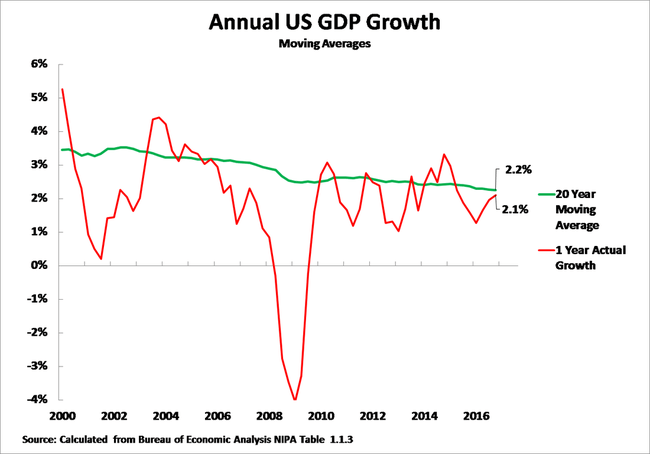 ‘Econo-fiction’ on a ‘China hard landing’
​Turning to comparison of the actual results of China’s economic performance with economic analysis in the US, it is illuminating to compare these actual results of China’s economic development with the predictions that were being made in parts of the media by Western so called ‘China experts’. During the last year a dominant theme in sections of the Western media, such as Bloomberg and the Wall Street Journal, was that China was supposedly going to suffer a ‘hard landing’? In the US this was clearly the overwhelming majority opinion in key research institutes – particularly those influencing US foreign policy. For example, on 5 April 2016 the Wall Street Journal reported:
‘At a recent workshop hosted by the Council on Foreign Relations, a nonpartisan U.S. think tank, participants—35 or so academic economists, Wall Street professionals and geopolitical strategists—lined up around three different growth scenarios for China. Only 31% chose the optimistic one, defined as 4% to 6% annual growth, dependent on leaders successfully implementing reforms; 61% foresaw a “lost decade” of 1% to 3% growth; the rest thought a so-called hard-landing, or contraction, was most likely.”
‘Of course it wasn’t a scientific survey, but what’s interesting is that apparently nobody considered the possibility that the Chinese government could deliver on its promise of “medium to fast” growth, meaning 6.5% or higher.’
​Given China’s 6.9% GDP growth over a year later, if this was the quality of analysis in the Council on Foreign Relations, one of the US’s most august institutions, it is little wonder US foreign policy will make mistakes!
Regrettably similar examples of this genre of ‘econo-fiction’ continue to appear in the US foreign policy media. For example, the US magazine Foreign Policy analysed this month: ‘given China’s deep-seated economic woes… many experts are…. worried about a Chinese slowdown.’ The reality is that in the nine years since the beginning of the international financial crisis the US economy grew by 12% while China’s economy grew by 106% – as shown in Figure 2.
Figure 2 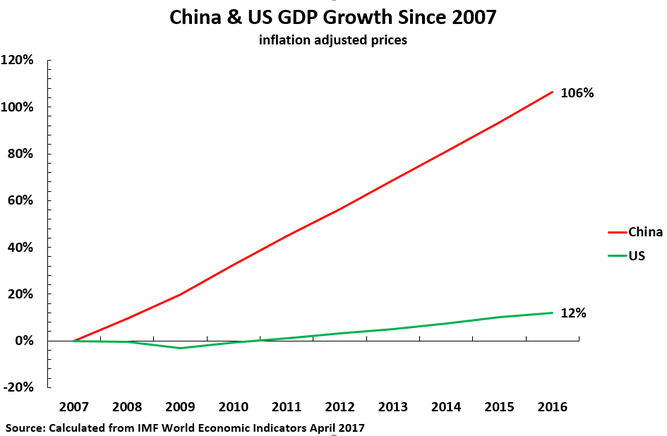 ​
Out of touch with reality
This entire genre of ‘econo-fiction’ in the West regarding China has a long and inglorious history.  Probably its most notorious example remains Gordon Chang. In June 2002, in is book The Coming Collapse of China, Chang declared: ‘A half-decade ago the leaders of the People’s Republic of China had real choices. Today they do not. They have no exit. They have run out of time.’ As unfortunately for this analysis China failed to ‘collapse’ Chang declared thirteen years later in December 2015:  ‘”China’s leaders no longer have the ability to prevent the economy from tumbling down… The leadership is now without tools”‘ Why the BBC, who featured this pronouncement by Chang, consider someone who has been perennially inaccurate a China expert shows propaganda bias as opposed to attempts to analyse reality. Such an approach is dangerous in foreign policy.
There is a well-known saying in economics, to describe the fact that reality sometimes coincides with the views of out of touch economic dogmatists, that ‘a stopped clock is right twice a day’. The ‘hard-landing’ school of analysts of China have succeeded in exceeding this – by never being right!
Some Western media analysis is very serious. Martin Wolf, chief economics commentator of the Financial Times, for example noted last week: ‘It is likely that Chinese capital, capital markets and financial institutions will become as influential in the world economy in the 21st century, as US capital, capital markets and financial institutions were in the 20th century.’
​Serious analysts, who want to have an accurate view of China’s, and therefore the global, economy and who made predictions of a China ‘hard landing’ or ‘crash’, will honestly admit ‘I was wrong’ – that is to be respected. Unfortunately, experience shows that portrayers of ‘econo-fiction’ predicting a China hard landing will continue to turn out their misanalysis.
Publishing such false analysis is an error itself. But It can also lead to wrong foreign policy positions, or cost companies hundreds of millions, even billions, of dollars due to a wrong understanding of China’s economic dynamics.
China’s latest GDP data, and the new revised projections by the IMF, are therefore not only important themselves but confirms once more the China’s ‘coming hard landing’ school has been wrong literally thousands of times in the 39 years since China’s economic reforms were launched. It may be pointed out to US foreign policy analysts that all such predictions may be taken with very much more than a grain of salt!

Definition of diplomacy
​Finally, turning from economics to geopolitics, it is important for China to convey an accurate estimate of world economic trends – as opposed to the inaccurate ones shown above to be widely held by US foreign policy analysts. A good friend of mine, a Russian diplomat, gave to me the most scientific definition of diplomacy. He said ‘some people think diplomacy is mainly about tricks or stratagems. It is not. No one can prevent a great power acting on the basis of its own interests. The danger is that if may act on the basis of wrong information. The job of diplomacy is therefore to ensure other countries never act on the basis wrong information.’
In the Middle East US overestimates of its military strength, and of the appeal of the ‘Western democratic model’, led to reckless US adventurism in the invasion of Iraq – with consequent deeply damaging consequences for the US and other countries. Overestimation of the US economy, and underestimation of China, might also lead US foreign policy to reckless and damaging confrontations with China.
China has nothing whatever to gain from empty boasting – in serious matters there is no virtue in ‘optimism’, no virtue in ‘pessimism’ only a virtue realism. Formulating an accurate estimate of the real situation of the world economy is a major task of China’s Think Tanks – and conveying this to counter currently unrealistic US foreign policy analysis is therefore an important major task both of China’s economic policy and diplomacy.

China faces slower Western growth than in the Great ...

Here’s why China and BRICS will drive global economi...