Linkedin
Facebook
Twitter
A Russian translation of my article ‘China Faces Slower Western Growth than in the Great Depression’ has been published under the title ”China in the New Period of the World Economy’ (Китай и новый период в мировойэкономике) in the magazine Economic Strategy (ЭКОНОМИЧЕСКИЕ СТРАТЕГИИ). This is merely a small part of a very welcome increasing economic dialogue between Russia and China. Earlier this year Wang Wen, who is Executive Dean of Chongyang Institute for Financial Studies, Renmin University of China was the only foreign speaker at the opening plenary session of the Moscow Economic Forum. I analysed this development in an article published in Chinese by New Finance. The English version of the article is published here. 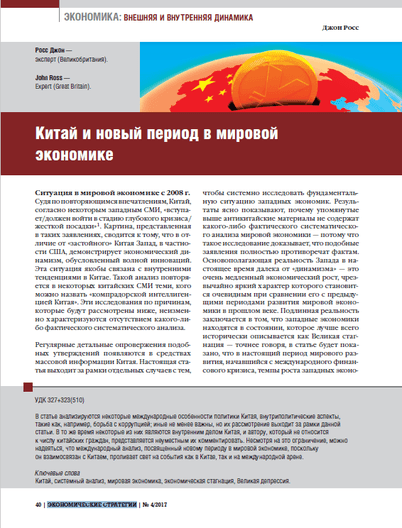 ​T​he growing international interest in China’s economic policy
Among developing countries interest in China’s economic policy has been sharply rising for a considerable period. The first spread of China’s influence in economic policy was into Indochina – where Cambodia, Vietnam and Laos adopted economic policies decisively influenced by China. As a result, these three countries became in the last three decades the most rapidly growing economies in the world after China. Then in India, the Modi government appointed as its chief economic adviser a specialist on China’s economy – Arvind Subramanian, formerly of the Peterson Institute for International Economics and author of ‘Eclipse: Living in the Shadow of China’s Economic Dominance’. China’s influence has also played a key role in some rapidly growing African economies.
But the new expansion of strong interest in China’s economic policies into Eastern Europe is a recent development. Lin Yifu, one of China’s most important economists, recently noted that Poland had recently taken the specific variant of Chinese economic reform embodied in his New Structural Economics as the basis for its long-term development programme. The Moscow Economic Forum represented a new and high level of interest in China’s economic policy in Russia.
As Russia is one of the world’s most important countries, and a key participant in BRICS and the One Belt One Road initiative, it is worth making a yardstick of relations in terms of economic policy between Russia and China. These post-Soviet relations may be divided into three periods. As I was a participant in these discussions giving some details of personal experiences may help to give a clear picture of the atmosphere of the different periods.

Russian economic disaster 1992-1998
The first period, in 1992-1998, may be described as active hostility by the leadership of Russia at that time to China’s economic policies. This was because China’s economic reform was, rightly, seen as the alternative to the ‘shock therapy’ proposed by the IMF and Western economic institutions.
In 1992 my article was published in Russian ‘Why the economic reform succeeded in China and will fail in Russia and Eastern Europe’ ( Почему экономическая реформа в Китае увенчалась успехом, а в России и Восточной Европе потерпела крах?) This article was based on economic theory – I had no direct contact with China at that time. It created considerable interest and led to high level meetings in Russia – with the foreign minister and other government leaders, my analysis was distributed to every member of the Russian Parliament by order of its chairman etc. A more detailed account of this is given in my book The Great Chess Game (一盘大棋? ——中国新命运解析).
But the key economic leaders of Russia at that time mounted a strong attack on China’s economic policy. For example, I was invited by Stroev, Chairman of the Federation Council, and by official protocol the third ranking person in Russia after the President and Prime Minister, to speak at a conference on economic policy. I spoke both on China’s economic reform and the strong interest of foreign companies to invest in China. President Yeltsin’s personal economic adviser Livshits demanded to reply to my speech stating that there would be large scale foreign investment in Russia, but not in China – the later facts of course showed his claims were the opposite of reality. In short, extremely high-level government forces in Russia were mobilised against any attempt to advocate learning from China’s economic policy. The phrase was repeatedly used that ‘Russia has nothing to learn from China’.
This period ended with the final debacle of the Russian post-Soviet economic policy launched in 1992 in Russia’s huge economic crisis in 1998. Shock therapy, which in all essential feature was the same as that advocated by neo-liberals in China now, produced the greatest economic collapse in a major country in peacetime since the Industrial revolution – Russia’s GDP fell by 39% in 1991-1998. As a result, in 1998 there was a catastrophic devaluation of the rouble by more than two thirds, a default on domestic state debt, and a moratorium on payment of foreign debt. Neo-liberal policies, in summary, led to economic catastrophe. As a result, at the political level first, Putin became prime minister in 1999 and replaced Yeltsin as president in 2000.

Russian economic policy after 2014
The third phase of Russia-China relations is from 2014 to the present day. This is marked by the growing interest in Russia in China’s economic policy as seen in the process leading to the Moscow Economic Forum.
In 2014 Russia was hit by the severe double blow of the decline in the oil price and the pro-Western coup d’etat carried out in Ukraine followed by heavy fighting in the east of Ukraine.  This was followed by Western economic sanctions. As a result, over the period 2014-16 Russia’s economy contracted by over 4%. From 2016-2021 Russia’s GDP is projected by the IMF to grow by only an annual average 1.4%. Russia is not projected regain its 2014 GDP level until 2020. In short Russia will have suffered six years of no net growth. On existing economic policy Russia’s is projected to be the lowest economic growth of any of the BRIC countries. Under those circumstances, of course, interest in China’s much more successful economic policy is growing strongly in Russia.
Taking the overall post-Soviet period 1991-2016 Russia’s total growth was 19%, an annual average 0.7%. China’s total growth was 941%, an annual average 9.8%. As a result, in 1991 Russia’s economy at current exchange rates was 136% the size of China’s, but by 2016 it was only 17% the size of China’s in PPPs and 11% at current exchange rates. In short far from ‘Russia having nothing to learn from China’, Russia’s economic policy had very much to learn from China!
This, of course, is the new situation reflected in the high level of interest in China’s economic policies growing in Russia. In 1992, the arguments presented in favour of China’s policies in Russia, and against the neo-liberal policies, appeared as issues of economic theory. By 2017 the combination of the economic catastrophe produced by neo-liberalism in Russia, and the success of China, meant those issues were no longer of theory but had been tested in practice – China’s ‘socialist market economy’ launched by Deng Xiaoping producing the greatest growth in a major country in human history, and neo-liberalism in Russia producing the greatest peacetime collapse in a major economy in modern history. These practical results can be understood by the population of Russia in a way that issues of economic theory cannot.
Hence the growing interest in China’s economic policies in Russia.

Why do Cubans live longer than Americans?