Here’s why China and BRICS will drive global economic growth

Linkedin
Facebook
Twitter
It is frequently underestimated just how dependent world economic growth is on only a few countries. Strikingly, on the IMF’s latest projections, the majority of world economic growth in the next five years will come from only three countries – China, the US and India. Collectively these will account for 54% of world growth at current exchange rates and 52% measured in purchasing power parities (PPPs).
This reflects the reality of the extreme concentration of the world economy in only a few states.

Therefore, even extremely rapid growth in a country outside the small group of largest economies, while it will produce desirable increases in living standards for that country’s inhabitants, it will not substantially affect global growth.
Given the domination of global development by a small number of large economies the members of two economic groupings which meet at summit level, the G7 and BRICS, will dominate world growth in the next five years.


China remains the biggest growth locomotive
Even within this framework, China will continue to be the single most decisive factor in world growth – while contrary to some assertions that the BRICS concept is no longer relevant BRICS will be a larger factor in world growth than the G7. To show this reality Table 1 sets out the percentages of world growth over the next five years that can be calculated from the IMF’s projections.
No matter how measured China will continue to be the largest source of world growth. Measured in PPPs its lead over the US will be huge – China accounting for 27% of world growth compared to the US 11%.
The data also shows that the role of the BRICS economies is more important for world growth than the G7.

Therefore, no matter how measured, the BRICS economies are a more powerful locomotive of world growth than the G7. 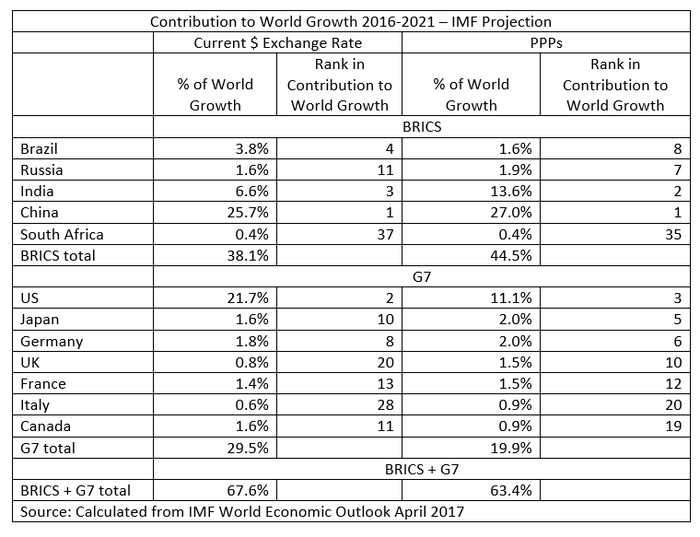 Misunderstandings on BRICS
Given the dominance of world growth by BRICS, above all China and India, why has the false idea arisen in some media that BRICS was no longer relevant? It was due to a misunderstanding – an assumption the BRICS economies were important because they were rapidly growing, whereas their true importance was that they were extremely large.
Various commentators, wrongly believing that the global impact of Jim O’Neill’s term BRICS was merely an example of skill in coining a good name, made attempts to popularize other groups of economies. For example, Fidelity Investment promoted MINT (Mexico, Indonesia, Nigeria, and Turkey). But no other proposed grouping achieved major recognition, for reasons which become clear when the real significance of the BRICS is understood.
Whether other developing economies grow rapidly or not, and whether or not they represent good opportunities to secure financial returns, the reality is they are too small to decisively affect the course of the global economy. For example, in the next five years, even measured in PPPs, the MINT economies on IMF projections will account for only 6.4% of world growth compared to 44.5% for BRICS. Only one economy outside either the G7 or BRICS, Indonesia, will account for more than two percent of world growth.
Size not Speed
That it is size of the BRICS economies which is decisive is even clearer if it is noted that, with the exception of China and India, neither BRICS nor the G7 includes the world’s most rapidly growing economies – see Table 2. Of the 192 countries for which the IMF makes growth projections then, leaving aside China and India, the other G7 and BRICS countries rank between 143rd and 182nd of the world’s most rapidly growing economies. But nevertheless, due to their size, the decisive role of the BRICS & G7 combined within the global economy may be seen by their combined accounting for nearly two-thirds of world growth measured in PPPs.
Conclusion
In summary, it’s vital not to confuse money making opportunities in small countries with their role in the world economy: size matters. In the next five years global economic growth will continue to be solidly dominated by the G7 and BRICS – above all China.
Table 2

The following article, showing the way China has become the main strategic pillar of globalisation, was written to analyse Xi ...
Read More →

In December 1991 the USSR collapsed - a geopolitical catastrophe with deep consequences for the people of the ...
Read More →

​During 2017 China has been tightening its capital controls to prevent any export of capital from the country ...
Read More →

Why ‘China bashing’ is a disaster for the US people

The 2016 US Presidential election witnessed the greatest destabilisation in US politics since the Great Depression. This instability ...
Read More →

Why do Western economies have hard landings but China doesn’t?