Linkedin
Facebook
Twitter
The outcome of the 24 September German elections was dramatic itself. The Christian Democratic Union/Christian Social Union’s (CDU/CSU’s) 33% was its lowest percentage of the vote since the first election in West Germany in 1949. The German Social Democratic Party (SPD) result was even worse – at 20.5% it was the lowest vote ever recorded by the SPD in any election in West Germany or the reunited Germany. The extreme rightest Alliance for Germany (AfD) received 13.5% of the vote – the highest for an extreme rightest party in Germany since World War II. The radical left Left Party received 9.2% of the vote. The increasing fragmentation of German politics was seen in seven parties entering the German parliament by receiving more than five percent of the vote – complicating the question of how to form a government. But the German election result also strongly confirms a more general political trend – the great weakening of the Western political ‘centre’ under the impact of the prolonged economic stagnation in the Western economies since the international financial crisis. 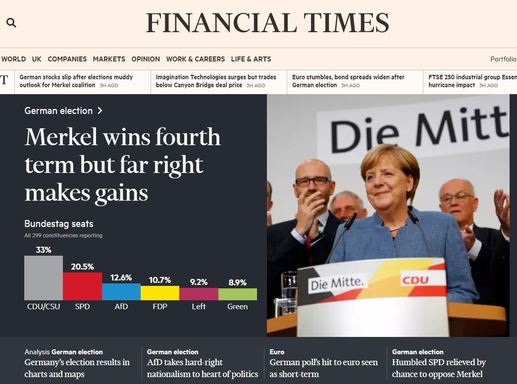 Rising Western political turbulence
This rising political instability in Western countries started in developing countries in 2010 with the outbreak of the ‘Arab Spring’ and destabilisation of a series of Middle Eastern countries. Since then, however, it has spread into the advanced Western countries, with the German election being therefore simply the latest illustration of the trend:
​

Therefore, it is clear that the result of the new German election is only part of the increasing political turbulence and continuing weakening of the political centre in the Western countries.

The Great Stagnation
The reasons for this weakening of the Western political centre is clear. Western economic growth is now actually slower than in the Great Depression after 1929 and, even according to the projections of the IMF, a pillar of Western economic orthodoxy, this trend will continue. The inevitable result is slowly deepening political instability in the West.

It is important to have a precise sense of proportion. Only in the ‘Anglo-Saxon’ countries, the US and UK, has this political instability reached the point where figures opposed by the dominant economic and political elites have come to office or their policies been adopted – Trump in the US and Brexit in the UK. In continental Europe the ‘centre’ forces, while significantly weakened by challenges from the right and left, have nevertheless managed to retain power so far. In France, while Macron crushed the traditional political parties in the presidential election, his pro-EU policies were not opposed by the traditional French political elite. In Germany, while the political centre was eroded, Merkel will remain Chancellor. In Britain while the Conservatives lost their majority in Parliament, and Corbyn’s Labour enjoyed a powerful increase in votes, Theresa May continued to hold onto the prime ministership of a minority government.

However, while there will be a limited Western economic upturn this year, there is no perspective, either from fundamental economic analysis or even according to IMF predictions, of a major medium-term upturn in the Western economies. Therefore, political instability and erosion of the political centre in the Western countries will continue and deepen.

In addition to the implications for citizens of Western countries themselves this is also clearly a development China must be aware of and take into account in its foreign policy. In previous periods of the existence of the People’s Republic of China, both during the Mao Zedong dominated phase from 1949-78, or during the Deng Xiaoping inaugurated reform period from 1978 up to the international financial crisis of 2008, China confronted Western economies which were growing relatively rapidly. This therefore was reflected politically in dominance by ‘centre’ political forces in the West. But the ‘Great Stagnation’ since the international financial crisis, the ‘new mediocre’ to use the phrase of IMF Managing Director Christine Lagarde, means a weakening of Western ‘centre’ political forces of which the German election is the latest example.
​
This new situation of slow growth in the Western economies since the international financial crisis is therefore accompanied by significant and so far deepening shifts in the configuration of political forces in Western countries.