Linkedin
Facebook
Twitter
The publication of official US economic data for 2016, which shows only 1.6% US GDP growth for the year, and only 0.9% per capita GDP growth, clearly demonstrates two things:

Using the method of ‘seek truth from facts’ first the data on the growth of the main global economic centres will be given and then an analysis of this.
​
US economy
Official data for US GDP for 2016 was recently published. This confirms clearly the sharp slowdown in the US economy during 2016.

This data is shown in Figure 1. This trends shows clearly that the claim of ‘strong recovery’ of the US economy during 2016 was entirely a myth. In fact, the US economy was slowing sharply. 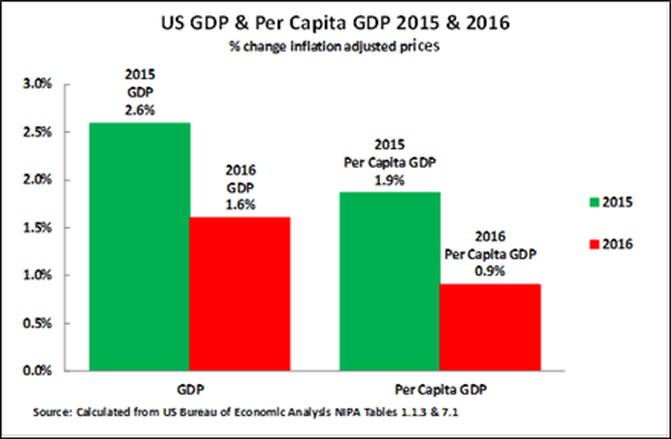 Therefore, not merely did the US economic decelerate sharply in 2016 but the US was the slowest growing of the major economic centres. 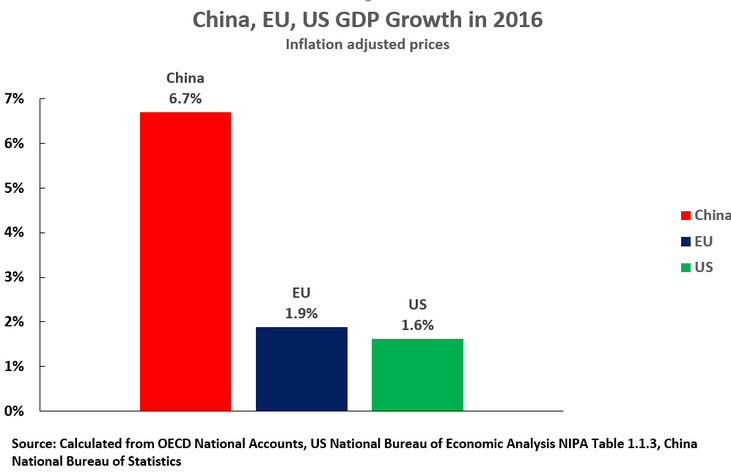 Myths of Western media
It was, of course, perfectly possible during the last year to factually follow this sharp slowing of the US economy as it was taking place. Already in August 2016 I analysed this data. At that time, major sections of the Western media were already attempting to propagate the myth of a ‘hard landing’ in China and ‘strong recovery’ in the US. Bloomberg, in particular, was publishing articles with titles such as ‘Soros Says China Hard Landing Will Deepen the Rout in Stocks’. But in fact, China’s economy slowed only marginally in 2016, from 6.9% to 6.7%, whereas as shown above, the US underwent a sharp economic slowdown.
That is the actual trends in the world economy were the exact opposite of those being claimed in Bloomberg and other sections of the Western media.

Inaccuracy of sections of the media
​In addition to the inherent importance of accurately analysing trends in the global economy for economic policy making and company strategy clear conclusions can be drawn from the contradiction between the facts of economic development in the last year and analysis in the media. In particular, these facts of economic development again confirm that large parts of the Western financial media is not primarily focussed on accurate economic analysis but on spreading unjustified claims regarding the economic success of the US and unjustified claims regarding ‘economic crisis’ in China.
Two clear conclusions therefore flow from these facts regarding global economic trends in the last year.

*   *   *
This is an edited version of an article which originally appeared in Chinese in New Finance on 3 February 2017.

Peak US growth under Trump slowest for any US Presid...

Why the US remains locked in slow growth

Why the CPC’s foreign policy is crucial not only for...

China’s socialist economy will deal with the g...