Comparison of Hong Kong and ‘poor whites’ in the US South

Linkedin
Facebook
Twitter
July 1st 2017 was the 20th anniversary of the correction of one of the great crimes against China and of one of the dirtiest episodes in Britain’s history. It was be the anniversary of the return of Hong Kong to China.
China’s President Xi Jinping has strongly stressed that reunification with Hong Kong was a great victory achieved by China on the path of full national unity and that this victory was even greater because it was achieved by peaceful means.  To understand what that means, let’s make a comparison everyone in the West can understand. When Lincoln, generally regarded as one of the very greatest of US Presidents, was faced with secession by the South, he waged the bloodiest war in US history to prevent it and to maintain the unity of the United States. The Northern generals Grant and Sherman fought that war with savage ruthlessness – Sherman openly declared ‘I would make this war as severe as possible, and show no symptoms of tiring till the South begs for mercy’ and his actions matched his words by inventing ‘total war.’ But China secured its territorial integrity, reunification with Hong Kong, by peaceful means.
Because this was a victory for the Chinese people, all other people’s rights to celebrate are minor in comparison. But nevertheless, it is worth pointing out why the reunification of Hong Kong with China was also a victory for Britain. This means examining the real role of Britain colonial policy in Hong Kong and the problems it created – many of them deliberately. It also shows the hypocrisy of Britain’s role in Hong Kong – unfortunately continuing to this day. This article by examining Britain’s occupation of Hong Kong therefore understands the real dynamics between Hong Kong and China and how problems will be overcome. This article combines two articles published in Chinese in Guancha.cn and Global Times. 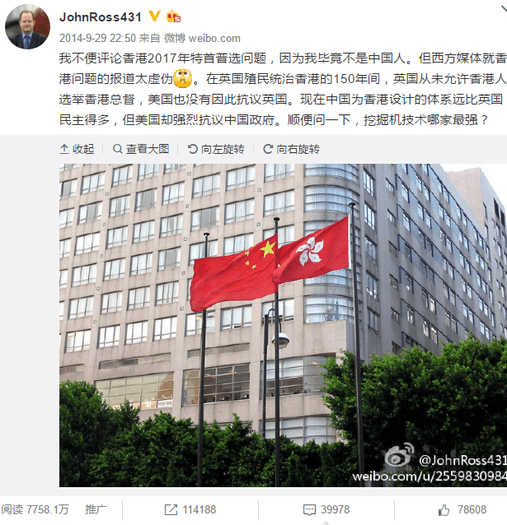 Britain’s damage to China
Britain’s occupation of Hong Kong began with hypocrisy, continued with hypocrisy, and some of Britain’s statements to this day continue to reek of the same hypocrisy. Britain’s actions did great damage not only to Mainland China but to the people of Hong Kong and to Britain itself. The most important people to celebrate national reunification on 1 July are therefore the Chinese people in both the Mainland and Hong Kong. But the British people also have their own smaller reason to participate in this celebrate.
The damage to China of Britain’s colonial actions on Hong Kong are well known internationally – if frequently carefully glossed over in Britain itself. The seizure of Hong Kong in the First Opium War of 1839-1842 opened up over a century of foreign aggression against China. That war itself was waged by Britain to allow it to export opium to China – thereby directly condemning to misery and death millions of people. This began a century of foreign invasions or and interventions in China, the direct and indirect consequences of which, in social upheaval and civil war, resulted in the deaths of perhaps one hundred million Chinese peopled. Millions of other Chinese or sacrificed their lives as martyrs in the struggle against that foreign invasion and intervention before the Communist Party of China led by Mao Zedong finally freed China from this foreign intervention.
Someone who is Chinese can explain infinitely more adequately than any foreigner the national pain and sacrifice of that struggle so I will not try. All I can say is that strangely it was a supporter of the Kuomingtang who movingly summarised it on British radio on the anniversary of the creation of the PRC in a way non-Chinese could clearly understand: ‘Mao Zedong and Zhou Enlai drove the foreign occupiers out of China and no one can take this glory away from them.’
Because someone who is Chinese can deal with the effects on China far more adequately than I can, here I will deal with the effects of Hong Kong on two other groups of people – on Britain and on Hong Kong. On the latter, I have perhaps one advantage that, because I am not Chinese, some people in Hong Kong speak to me more openly than they would someone from Mainland China. I hope making this analysis may make it easier to understand the origins of some issues with Hong Kong and how they will be historically overcome as the legacy of British colonialism fades.

Britain and ‘Western values’ in Hong Kong
Starting with Britain, how did it gain Hong Kong? It waged a war to force China to import opium – that is Britain condemned millions to misery and death by drug addiction so Britain could make a profit. This was hypocrisy of ‘Western civilization’.
Britain then continued to rule Hong Kong for over 150 years, for most of that time with a racist system of a British elite and few hand-picked rich Chinese,  without allowing the election of the governor of Hong Kong – only to suddenly discover when Hong Kong was to be returned to China it was a ‘fundamental principle’ Hong Kong must elect its governor by a specific system. Strange this ‘fundamental principle’ was never carried out by Britain. The consequences for Hong Kong of Britain’s deliberate attempt to create a Hong Kong ‘comprador elite’ cut off from and actively hostile to China are analysed below.
When Margaret Thatcher said Britain should continue to play some role in the running of Hong Kong after its return to China she received a blunt ‘no’ from, Deng Xiaoping – so shocking the so called ‘iron lady’ that she famously fell over on the visit at the shock of meeting a real great historical figure and his response for his country.
Now that Hong Kong has been returned to a China from which it was stolen by force and drugs, and incidentally now does chose its chief executive by a more democratic system than Britain ever allowed, people who carried out this undemocratic system, such the last governor Chris Patten, continue to write hypocritical articles which never explain the real history of Britain in Hong Kong.
There is a lesson in all this for Britain itself. Marx famously wrote ‘A nation that enslaves another forges its own chains’. He said it about Britain’s relation to Ireland but it equally applies to Hong Kong. Among the chains that a country forges for itself by enslaving another are mental ones. Britain cannot see its own reality until it sees honestly the hypocrisy and crimes its colonialism inflicted on other countries. Discovering the truth about Britain’s past, including centrally on Hong Kong, is therefore part of the road to Britain’s own real liberation.
In Britain’s foreign relations there is a simple test to find out what Britain should be proud of and what it should be ashamed of and Hong Kong forms a central part of that. Numerous things from Britain are avidly voluntarily welcomed by other countries – from Shakespeare, Newton, and Darwin to Harry Potter! These are things every person in Britain can and should be proud of. Those things which Britain enforced on other peoples and countries by force – the Atlantic Slave trade, the occupation of Ireland, the occupation of India, and centrally the occupation of Hong Kong – are things to be ashamed of in Britain’s history.
So on 1 July people in Britain should join China’s great party and have a glass of champagne or baijiu (Chinese rice wine0 to celebrate the anniversary of the righting of a great wrong – the seizure of Hong Kong. And by sweeping away the cobwebs of Britain’s hypocrisy on Hong Kong this will not only, most importantly,  celebrate China  righting a great wrong but help to create the mental conditions for really liberating Britain itself from the same hypocrisy and chains.

Growth in the G7 ‘Great Stagnation’ will...