This article finds that the 1st, 2nd, 3rd, and 4th fastest growing economies during the period since the putting forward of the neo-liberal ‘Washington Consensus’ all follow, or are highly influenced by, China’s development model. These are the socialist states of China and Vietnam, Cambodia, and the Laos People’s Democratic Republic. Alternative development models, including the Washington Consensus, have been a failure in comparison. China’s economic model also far outperformed alternatives in poverty reduction.

These facts have international implications. The socialist development model followed by China was the unique creation of China’s economic policy as developed from Deng Xiaoping onwards. The Washington Consensus is the dominant economic strategy put forward by international economic institutions such as the IMF and World Bank.

The overwhelming economic superiority of the performance of countries following or highly influenced by China’s socialist development model shows that China’s economy not only outperformed alternatives but China’s economic strategy ‘out thought’ Western economic models.

A detailed theoretical analysis of the reasons that China’s development model outperformed alternatives is made in Chinese in my book 一盘大棋？中国新命运解析 (The Great Chess Game? A New Perspective on China’s Destiny). Shorter summaries may be found in English in my articles Deng Xiaoping and John Maynard Keynes, Why Adam Smith’s ‘classical theory’ correctly explained Asia’s growth and Deng Xiaoping – the world’s greatest economist. This theoretical analysis is therefore not dealt with here. The focus here is simply on establishing the facts – facts which clearly establish the outperformance by China’s socialist development model of any alternative.

The reasons to make such a factual comparison should be clear. The wise Chinese phrase says ‘seek truth from facts’. Put in international language this dictum asserts the only basis of scientific analysis: that if facts and theory do not coincide it is the theory that has to be abandoned not the facts suppressed. ‘Dogmatism’, a fundamentally anti-scientific approach, consists of clinging to a theory even when the facts contradict it.

Despite this requirement for factual study supporters of the Washington Consensus appear to strongly dislike systematic factual comparisons of the two development approaches. The reasons for this will become evident from the data below. This shows that China’s ‘socialist development strategy’ far outperforms the neo-liberal ‘Washington Consensus’.

The term ‘Washington Consensus’ was first coined in 1989 by US based economist John Williamson – although the actual practical policies were commenced in the late 1970s/early 1980s. The Washington Consensus is a classic form of ‘neo-liberalism’. It advocates in terms of economic policy privatisation and minimisation of the state’s economic role. Its social policy may be described as ‘trickle down’ – a belief that if there is economic growth all layers of society will automatically benefit as the benefits ‘trickle down’ from richest to poorest. Legally the Washington Consensus states the overriding goal is the strongest guarantees of private property. Politically, although claiming to be neutral, this combination of policies evidently favours capitalist and conservative political parties

China’s ‘socialist development strategy,’ which commenced with its 1978 economic reforms, is radically different in its entire framework and directly counterposed on key policy issues. China used, in Xi Jinping’s phraseology on economic policy, both the ‘visible’ and the ‘invisible hand’ – not simply the private sector but also the state. Indeed, in China itself, as the 3rd Plenum of the Central Committee of the 18th Congress of the CPC insisted: ‘We must unswervingly consolidate and develop the public economy, persist in the dominant position of public ownership, give full play to the leading role of the state-owned sector.’

In social policy, accompanying the economic dominance of the state sector, China did not rely on ‘trickle down’ but, in line with its socialist approach, China:

undertook massive and conscious programmes deliberately aimed at eradicating poverty – these are to be completed in the 13th Five Year Plan by 2020 by lifting the remaining 70 million people out of poverty;
China deliberately promotes development through urbanisation as a way of moving the population into higher productivity economic sectors;
China deliberately sought to narrow the income gap between rural and urban areas;
China does not rely exclusively on ‘the market’ but deliberately uses state infrastructure spending to raise the economic level of its less developed inland provinces;
legally China guaranteed private property but a key economic role was assigned to the state sector,
politically China was socialist.
What, therefore, were the factual outcomes of these two radically different approaches to economic development? To assess this, for reasons which will become evident from the statistics, not only will China itself be analysed but three other countries will be considered. These are Vietnam, which defines itself as socialist and which in reality drew heavily from China’s ‘socialist market economy’ approach, Cambodia, and the Lao People’s Democratic Republic – the latter two also being highly influenced by China’s development model.

The facts are summarised in Table 1 which shows the annual average rate of per capita GDP growth up to 2015 from 1978, when China began its economic reforms, from 1989, when the Washington Consensus was put forward, and from 1993 when data for Cambodia becomes available.

The data is of course extremely striking – indeed conclusive. From 1993-2015, when all four countries can be analysed China, Cambodia, Vietnam and Laos ranked respectively 1st, 2nd 3rd, and 4th in world per capita GDP growth – peripheral cases of countries with populations of less than 5 million or dominated by oil production are not included. From 1989, the date of the putting forward of the Washington Consensus, to 2015 China, Vietnam and Laos ranked respectively 1st, 2nd and 3rd in the world for countries in per capita GDP growth. From 1978 onwards China ranked 1st among all economies in terms of economic growth.

This ranking of growth necessarily shows that China’s economic model not only produced more rapid growth than developed economies but also capitalist economies at the same stage of economic development (level of per capita GDP). 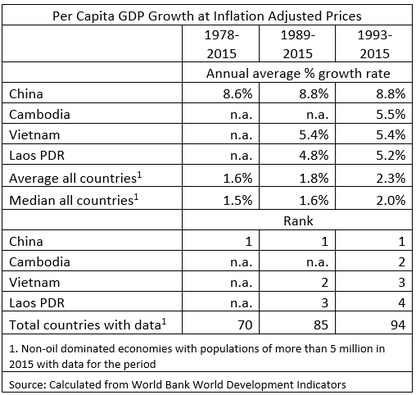 The contrasts not only of average per capital GDP growth but in eradication of poverty were overwhelming. From 1981 China lifted 728 million people out of World Bank defined poverty. Another socialist country, Vietnam, lifted over 30 million from poverty by the same criteria. The whole of the rest of the world, in which the dominant model advocated by the IMF was the Washington Consensus, lifted only slightly 120 million people out of poverty. In summary 83% of the reduction of the number of those living in poverty was in China, 85% was in socialist countries, and only 15% of the reduction in the number of those living in poverty was in capitalist countries.

China’s ‘socialist development model’ therefore was a huge success while the Washington Consensus was a failure. Economic development remains the most fundamental issues for the overwhelming majority of the world’s population- on the latest World Bank data, 84% of the world’s population lives in developing countries. Any objective analysis based on aiming to maximise a countries development potential would therefore start with China’s ‘socialist development model.’ The facts of world economic development show that China’s development policies of a huge role for the state sector, large scale conscious policies to eradicate poverty, and a socialist political orientation were the most successful in producing both economic growth and poverty reduction.

The simple but decisive fact that the 1st, 2nd, 3rd and 4th most rapidly growing economies during the period of the Washington Consensus all use the ‘China socialist development model’ is the factual demonstration of the superiority of China’s socialist development path to any capitalist alternative. 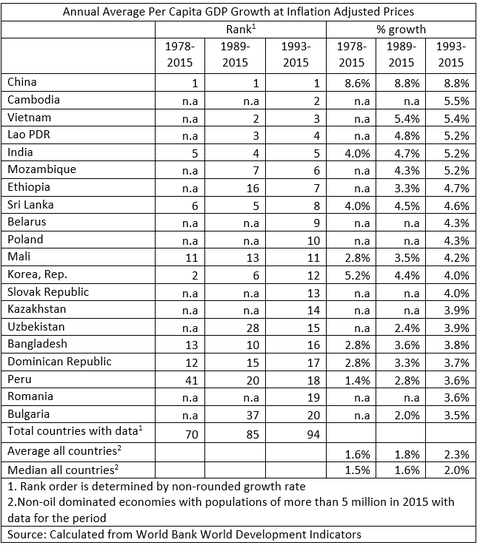 *   *   *​
This is an edited version of an article which originally appeared in Chinese at Guancha.cn.

Why Trump won’t persuade Apple to produce the iPhone...

Why the US economy is slowing – how it will affect t...