The Financial Times carried on 27 November a long article on China’s increasing impact in Central and Eastern Europe under the self-explanatory title ‘Eastern Europe’s China pivot’. Unfortunately for copyright reasons it is not possible to republish the article and a subscription to the FT is necessary to read it. However the general analysis of China’s impact can be understood from the following excerpts:

‘In Hungary it is hailed as the “Eastward Opening”. Serbian authorities see it as the glue in a “reliable friendship”, while the Polish government describes it as a “tremendous opportunity”. … the 16+1, a grouping of 16 central and eastern European countries led by China… [is a] catalyst for… China’s ability to finance and build the roads, railways, power stations and other infrastructure that some poorer central and eastern European countries need…. 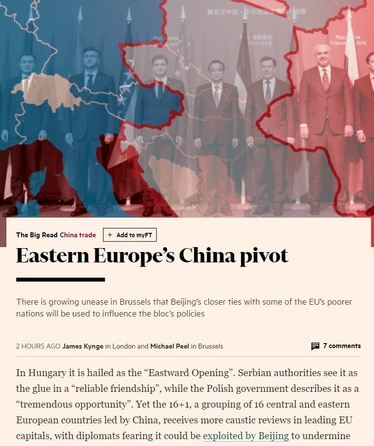 ​’as the 16 countries — Hungary, Bulgaria, Romania, Poland, Bosnia and Herzegovina, Serbia, Croatia, Slovenia, Slovakia, Albania, Macedonia, Montenegro, Czech Republic, Lithuania, Latvia and Estonia — prepare for an annual summit in Budapest on Tuesday, it is clear that Beijing’s star is rising in central and eastern European nations.

‘“The world economy’s centre of gravity is shifting from west to east; while there is still some denial of this in the western world, that denial does not seem to be reasonable,” Viktor Orban, the Hungarian prime minister, said in October. “We see the world economy’s centre of gravity shifting from the Atlantic region to the Pacific region. This is not my opinion — this is a fact.”

The lure for central and eastern European nations is clear. Since 2012, Chinese companies, backed by state banks, have announced an estimated $15bn in investments in infrastructure and related industries, according to data collected by the Center for Strategic and International Studies, a Washington think-tank, in co-operation with the Financial Times. “To China, the 16 countries are important in their own right but also as a bridge into the EU,” says Jonathan Hillman, director of the CSIS Reconnecting Asia Project…
​
‘Serbia, with which China has a “comprehensive strategic partnership” and an “all-weather friendship”, is due an estimated $1.9bn in infrastructure investments, according to the CSIS data. Hungary, with which China officially has a “high level of mutual trust”, has been promised an estimated $1.5bn. Milos Zeman, the Czech president, last year described his country — with whom some $3bn worth of deals has been announced — as “a gateway for the People’s Republic of China to the EU”.’

The evidence of China’s increasing impact in Central and Eastern Europe is therefore clear from the article despite the fact that unfortunately its authors, James Kynge and Michael Peel, instead of welcoming this ‘win-win’ outcome for both Central and Eastern Europe and China, spend a lot of time criticizing it both on political grounds and quoting unsubstantiated charges China is trying to compete with existing international institutions.

In addition to the interest of the FT’s clear statement of China’s increasing impact in Eastern Europe readers may therefore be interested in the comment I have put on the article:

‘The article cites “Jonathan Hillman, director of the Reconnecting Asia Project at the Center for Strategic and International Studies. “Under both the 16+1 and the Belt and Road, China is the common denominator. To shift from balancing against existing institutions to effectively competing with them, [Beijing] will need to deepen these parallel structures.”

‘But there is no indication China wants to create, or has any strategy, for competition with existing structures. What it states it wants, and is consistent with its actions, is appropriate weight for its new economic position within existing structures. The AIIB, which in any case is not a competition for existing structures, was created only after a long period of failure to adequately reform the IMF and World Bank – in particular an inordinate delay of the US Congress in ratifying changes to the IMF which were agreed by governments during the international financial crisis.

‘As regards economic strategy as China is demonstrably producing faster growth than the EU the Central European countries can scarcely be blamed for wanting to learn from China’s success.’