The most fundamental source of confusion for Western commentators on China’s economy is that they mistakenly believe their own myth that China’s is a capitalist economy – not a socialist one. In fact China is clear that the state sector plays the leading role of the economy – something no capitalist economy does.

The latest meeting of the Central Committee of China’s ruling Communist Party to focus on the economy, the 3rd Plenum of the 18th Central Committee, stated: ‘‘We must unswervingly consolidate and develop the public economy, adhere to the dominant position of public ownership, state-owned economy to play a leading role, and constantly enhance the vitality of the state economy, dominance and influence.’

​Xi Jinping in affirming the socialist character of China’s economy, states clearly: ‘The mainstay status of the public ownership and the leading role of the state-owned economy must not waver,’ 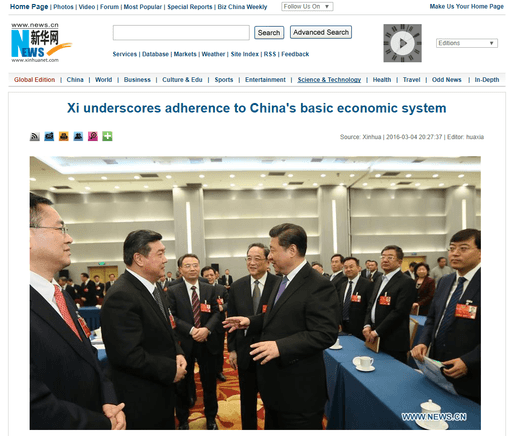 It is therefore striking that new data confirms strong performance by China’s state owned enterprises (SOEs). In January-July 2017 total revenue generated by SOEs was more than $4.3 trillion, up 16.5% year-on-year. Revenue by central SOEs rose by 15.1% percent and that from local ones rose by 18.7%.SOE profitability also rose strongly. Overall SOEs saw a 23.1% increase in profits year-on-year from January to July. Local SOEs achieved a 35.8% growth in profits, while central SOEs profits rose 17.3%.

​This strong performance shows China’s policy of enhancing its SOEs perormance, and their decisive role in the economy, is bearing strong fruit.

​A factual analysis of the way China uses state investment and its SOEs to maintain strong economic growth amid a relatively stagnant world economy can be found on this website here. A more theoretical analysis of how China’s socialist economy differs from a capitalist one, and the consequences of this can be found at ‘Deng Xiaoping & John Maynard Keynes‘.​