The following article, showing the way China has become the main strategic pillar of globalisation, was written to analyse Xi Jinping’s visit to the World Economic Forum in Davos. However the article has not dated as the analysis has been vindicated by events following this.

Anti-globalisation and protectionist tendencies were already developing in US policy before Trump’s election. As the article analyses ‘the reality of the Trans Pacific Partnership (TPP) was not a move for freer trade – being in reality an anti-China bloc’. This constituted a fundamental reversal in US international economic policy as it had existed since World War II – previously the US had supported globalisation. But nevertheless Trump’s election developed these anti-globalisation and protectionist tendencies still further. 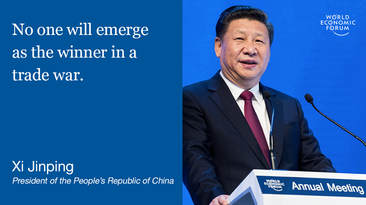 Xi Jinping is the first Chinese president to speak at the Davos World Economic Forum. This visit has attracted even greater international media attention than the normally high levels of interest in a trip by China’s leader. As the Financial Times chief foreign affairs columnist Gideon Rachman put it, “The big star of this year’s forum is certain to be Xi Jinping.”

The reason for this is well understood. China’s unequivocal support for open economies and globalization is now clearly in contrast to the protectionism embraced by U.S. President-elect Trump and that was manifested on a smaller scale in the U.K. Brexit referendum.

In terms of declared positions on globalisation, a definitive turning point has already been made. Every U.S. president since World War II has at least verbally committed to free trade and globalisation. Trump explicitly broke with this historical U.S. position with threats to impose a 35 percent tariff on Mexico, a 45 percent tariff on China, to impose a U.S. “border tax”, to renegotiate the North American Free Trade Agreement (NAFTA), by his pressure for U.S. companies not to invest in Mexico despite it being a NAFTA partner and by his clear overall policy statements. In parallel, while the reality of the Trans Pacific Partnership (TPP) was not a move for freer trade – being in reality an anti-China bloc – nevertheless its unilateral abandonment by Trump made the U.S. appear an unreliable negotiating partner.

This directly and powerfully affects other countries in addition to China – hence the wide international interest in Xi Jinping’s Davos visit. Other countries well understand, both factually and theoretically, the decisive importance of the international trade and globalisation.

Factually, numerous studies demonstrate the positive correlation of an economy’s international openness and its development speed. Growing internationalisation by almost all countries was a decisive trend during the long period of relative global international economic stability and growth after World War II – a marked contrast to 1929-39 global economic fragmentation, marked by the infamous U.S. Smoot-Hawley protectionist tariff, which led to the greatest economic crisis in modern history.

Clear theoretical understanding of economic openness’s advantages has existed for over two hundred years. The first sentence of the founding work of modern economics, Adam Smith’s The Wealth of Nations, is, “The greatest improvement in the productive powers of labour… have been the effect of the division of labour.” But division of labour in a modern economy has reached a point where it is necessarily international in scale. International supply chains, which alone ensure the cost efficiency of modern production, flow from the reality that different countries have different advantages in different parts of production. Attempts to create self-contained national economies necessarily make economies less efficient. Therefore, every strategy of “import substitution” or attempt to create an efficient national self-contained economy necessarily fails.

U.S. protectionism’s negative effects, with its inevitable international reciprocal retaliation, would hit even the U.S., the world’s largest economy – increasing prices of imported goods for consumers and costs for U.S. producers while restricting export markets. Even for the U.S., three quarters of the world market in economic terms and 95 percent of the world’s customers in population terms lie outside its borders. A protectionist U.S. economy cannot match the advantages of orientation to a global economy.

But for Germany, 95 percent of its potential market is outside its borders, for Brazil 97 percent, for Australia 98 percent, for Thailand over 99 percent. Protectionism would be more damaging for them than the U.S. Such countries therefore applaud Xi Jinping’s unequivocal defence of globalisation – not because of deference to China, but out of national self-interest because globalisation really is “win-win.”

Sometimes in the media there is loose talk of a “rise of protectionism and populism.” But this imprecise expression conceals a precise reality. In some European countries, there certainly is an increase in support for protectionist populist parties – for example, in France Marine Le Pen’s National Front or the Alternative in Germany. But these are minority parties who are not in power and who in most cases have no realistic prospect whatsoever of forming governments. Only in the Anglo-Saxon economies have protectionist forces actually come to office or been able to determine government policy.

The overwhelming majority of countries, including traditionally firm U.S. allies such as Germany or Australia, have expressed opposition to Trump’s protectionist policies. When Germany’s Chancellor Merkel recently said, “We see protectionist tendencies,” she was naturally discreet enough not to mention the U.S. But most people were well aware that the U.S. was included in the countries she was speaking of. A large majority of other countries listening will strongly agree either publicly or silently with Xi Jinping’s clear statements in support of open economies and globalisation at Davos.

Maintaining an internationally open economy is vital not only for governments but for the world’s population. Globalisation has brought immense benefits to the majority of the world’s people, strongly confirming economic theory. Certainly, socialist countries were most able to take advantage of globalisation’s benefits. The world’s four fastest growing economies in the last 30 years have been socialist – China, Laos and Vietnam, together with a Cambodia whose economic policies are decisively influenced by China. China experienced the world’s most rapid rise in living standards. Eighty-three percent of the people in the world lifted out of internationally defined poverty were in China, and a further 2 percent were in Vietnam – only 15 percent were in capitalist countries.

But while socialist countries made the most efficient use of globalisation, other countries also strongly benefitted. India under Modi has consciously moved closer to China’s economic model, and India is now the world’s other major rapidly growing economy. Several African countries, basing themselves on globalisation, have achieved growth rates of 6-8 percent a year.

Certainly the political crisis in the Anglo-Saxon countries, which has produced support for the protectionist dead ends, was created by a failure to improve their population’s living standards. U.S. median household incomes are lower than 16 years ago, U.S. inequality has soared. In the U.K., real incomes in the last eight years experienced their most prolonged decline for a century. But this was not inherent in globalisation, as demonstrated by the dramatic improvements achieved by most countries, but a result of the specifically neo-liberal paths launched by Reagan and Thatcher. It is for this reason, not globalisation, that a protectionist political dead end has become strongest in the Anglo-Saxon economies.

What is really behind Trump’s obsession with R...

US is losing the battle for world public opinion to ...