Linkedin
Facebook
Twitter
Much analysis in the Western media very much underestimates the significance of China’s One Belt One Road (B&R). The reason for this is that it is difficult for the West to adjust to a reality whereby the main locomotives of world growth are not in the US or Europe but in Asia and developing in connection with China. Therefore it is worthy of attention that a leading Western journalist, Philip Stephens, chief political commentator of the Financial Times, under the title ‘A train that proclaims China’s global ambition’, has made an analysis of B&R that cannot in any way be accused of underestimating it. On the contrary Stephens accurately assesses the great impact of B&R.​​ Looking at Stephens article therefore allows an assessment of both the strengths and weaknesses of serious Western analysis of B&R. 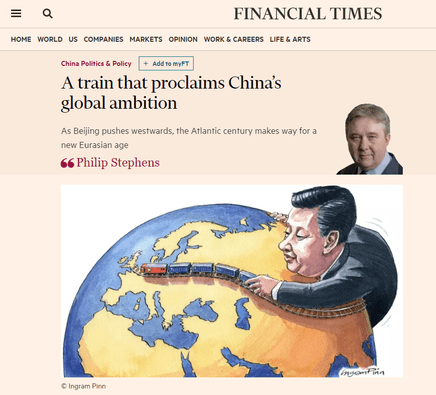 The great strength of Stephens analysis, as already noted, is that it in no way underestimates the global impact of B&R. Indeed the subtitle of the article is: ‘the Atlantic century makes way for a new Eurasian age.’
Stephens specifically notes the considerable underestimation of B&R in much of the Western media: ‘Among this year’s under-reported events was the opening of a new rail freight route. A locomotive, pulling wagons loaded with Chinese manufactures, set out in early January from Yiwu in Zhejiang province. Some 18 days and seven countries later it arrived at a goods depot almost 7,500 miles away on the eastern edge of London.’
If correction of underestimation of B&R in the Western media is the very substantial strength of Stephens article its weakness is underestimation of the economics of  B&R, and therefore a  resulting tendency to see it in too geopolitical terms – in the worst case, citing Zbigniew Brzezinski, as almost a ‘geopolitical conspiracy’. Stephens write: ‘The jury is out on the economics of this latest reincarnation of the ancient silk routes. That is beside the point. The journey above all else was a statement of China’s geopolitical intent.’
He notes: ‘Zbigniew Brzezinski, the former national security adviser to president Jimmy Carter who until his death this year was Washington’s sharpest strategic thinker, long ago grasped the significance of what he called the “axial supercontinent”. “A power that dominated Eurasia”, he wrote as far back as 1997, “would exercise decisive influence over two of the world’s three most economically productive regions, western Europe and East Asia . . .”… As the US retreats, China makes its presence felt. Quite suddenly, the Eurasian century has a certain ring to it.’
The weakness of Stephens analysis, which gives rise to the implication that B&R is really simply, or overwhelmingly, only about geopolitics is (implicit) underestimation of the economics involved.
The B&R region is now by far the most powerful locomotive not only of the regional but of the global economy.